The big liners on the Atlantic run were often described by the press as floating hotels but they often outstripped their land-based counterparts. While third class remained fairly spartan, by the time of Titanic, second class accommodations were vastly improved and first class was positively lavish.

The interior design was often based on ‘period’ designs from Europe, for example Italian Renaissance woodworking or Queen Anne Regency staterooms. The oak first class grand staircase was in William and Mary style and the first class dining room was Jacobean, while the first class smoking room and the reading and writing room were in the early and late Georgian style. Titanic even had such exciting new innovations as a true swimming pool (rather than a plunge bath), Turkish baths and a squash court.

Apart from the band and betting on the ship’s daily progress, there was little in the way of organised entertainment. The only routine was meals. First and second class passengers promenaded, gossiped, drank, made business deals and gambled but had to stick to their own areas of the ship. Signs of notice would warn classes not to stray onto another’s deck space and barrier gates were commonplace. Few first class passengers used the gym or the Turkish bath, but many of them sent and received ‘Marconigrams’, as wireless communication was still a novelty, especially at sea.

Various games and sports were common on board liners on the Atlantic run. Passengers could play Shuffleboard, Cricket, Deck Quoits, Bull Board and Tennis, with nets being rigged up for the latter two to prevent the ball from going overboard. Indoor games included Chess, Draughts, Dominos and card games of all kinds. No games of chance were permitted in public rooms on Sundays. The daily sweepstakes, where passengers wagered against the distance travelled each day by the ship, was one form of gambling that nearly every passenger joined in with at some point in the voyage.

With thanks to Bruce Beveridge and Steve Hall

Reading and Writing Room on A-Deck
The first class gymnasium 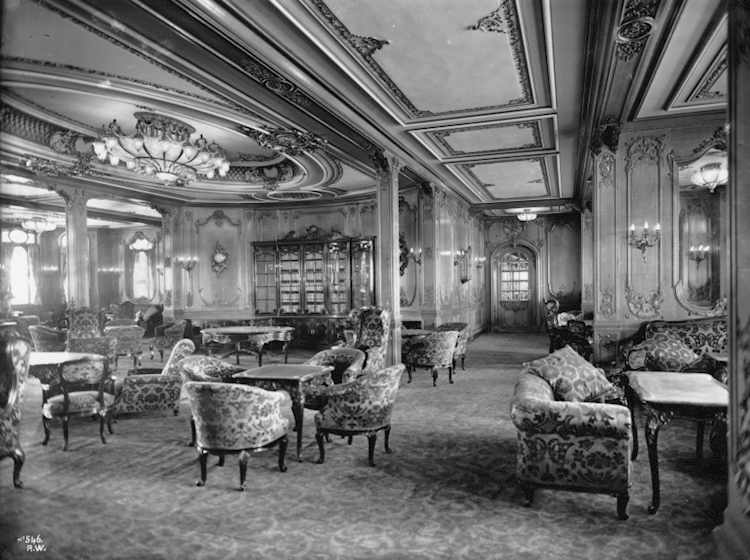 The first class lounge on Olympic, decorated in Louis XIV style and inspired on the Palace of Versailles
A first class cabin