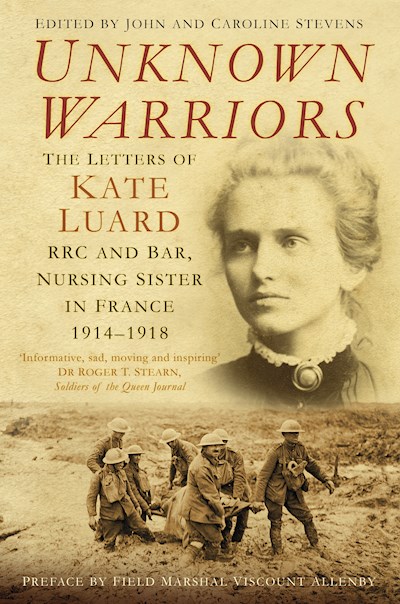 The words of Unknown Warriors resonate as powerfully today as when first written. The book offers a very personal glimpse into the hidden world of the military field hospital where patients struggled with pain and trauma, and nurses fought to save lives and preserve emotional integrity. The book’s author was one of a select number of fully trained military nurses who worked in hospital trains and casualty clearing stations during the First World War, coming as close to the front as a woman could. Kate Luard was already a war veteran when she arrived in France in 1914, aged 42, having served in the Second Boer War. At the height of the Battle of Passchendaele, she was in charge of a casualty clearing station with a staff of forty nurses and nearly 100 nursing orderlies. She was awarded the RRC and Bar (a rare distinction) and was Mentioned in Despatches for gallant and distinguished service in the field. Through her letters home she conveyed a vivid and honest portrait of war. It is also a portrait of close family affection and trust in a world of conflict. In publishing some of these letters in Unknown Warriors her intention was to bear witness to the suffering of the ordinary soldier.