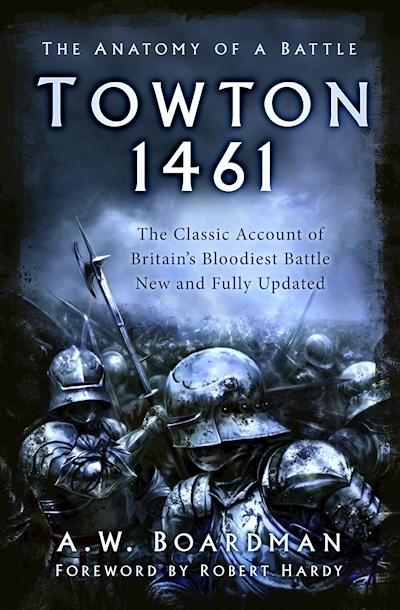 ‘Towton, the bloodbath that changed the course of our history . . . an invaluable book’ A.A. Gill, The Sunday Times Magazine

‘Boardman has unrivalled knowledge of the ground and the record, such as it is, of the battle fought there’ Times Higher Education Supplement

‘a marvel of evocation’ Robert Hardy

Palm Sunday 1461 was the date of a ruthless and bitterly contested battle fought by two massive armies on an exposed Yorkshire plateau for the prize of the Crown of England. This singular engagement of the Wars of the Roses has acquired the auspicious title of the longest, biggest and bloodiest battle ever fought on British soil. The slaughter left an indelible mark on the population that has been largely forgotten until relatively recent times: Shakespeare likened the struggle to the wind and tide of a mighty sea that set father against son and son against father. But what drove the contending armies of York and Lancaster to fight at Towton? And what is the truth behind the legends about this terrible battle where contemporaries record rivers ran red with blood?

A.W. Boardman answers these questions and many more in this new and fully updated fourth edition of his classic account of Towton. Illustrated throughout with contemporary artwork, modern photographs and specially drawn maps, Towton 1461: The Anatomy of a Battle is a fascinating insight into the reality of the battlefield and the men who fought there in a blinding snowstorm over half a millennium ago.