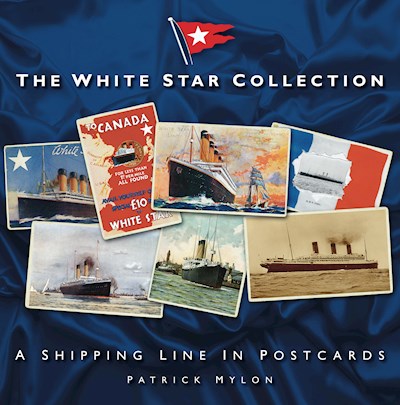 A sumptuous and delightful collection of postcards trace the history of the White Star Line. White Star Line was originally founded in Liverpool in 1845 to travel to Australia but was eventually purchased by Thomas Ismay and transformed into the successful Oceanic Steam Navigation Co. Cleverly merging with Harland and Wolff, the line focussed on luxury over speed, developing many of the world’s favourite vessels: Oceanic, Titanic, Olympic, Britannic, and Majestic. Finally merging with its great rival Cunard in the 1930s depression, the companies continued to operate separately while flying one another’s flags. Patrick Mylon has been collecting postcards of White Star Line and its vessels for nearly thirty years, amassing a grand collection. This evocative book explores the colourful history of White Star Line, from personal postcards and messages from passengers, crew and troops, to the careers of her vessels in peacetime and at war. This beautiful book includes ships with alternative identities, unusual stories like the planned escape of Dr Crippen and his famous interception, and showcases a wide variety of interior views, adverts and unpublished ‘proof’, silk and Company Issue cards, conveying the glamour, drama and history of this world-renowned line.