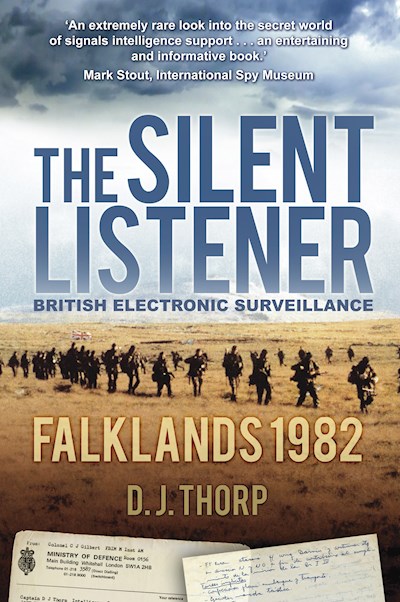 On 2 April 1982 Argentina launched Operation Rosario, the invasion of the Falklands. The British, caught off guard, responded with Operation Corporate. Deployed alongside the rest of the British Army was a small specialist intelligence unit, whose very existence was unknown to many commanders and whose activities were cloaked in the Official Secrets Act. Trained during the years of the Cold War, the OC of the unit, D.J. Thorp, was tasked with providing electronic warfare support – interception of Argentinean electronic and radio signals – allowing the British to be in real time receipt of enemy plans long before execution. He personally briefed Col H Jones before the Battle of Goose Green. For the first time in print, The Silent Listener confirms the existence and role of the Special Task Detachment during Operation Corporate and provides details of the deployment and operational role of a dedicated ground based electronic warfare (EW) weapons facility. It also details the development of electronic warfare during the Cold War period, including the establishment of a communications intercept site on East Island following the cessation of hostilities in the Falklands, and D.J. Thorp’s top secret role in the investigation into the sinking of ARA General Belgrano.