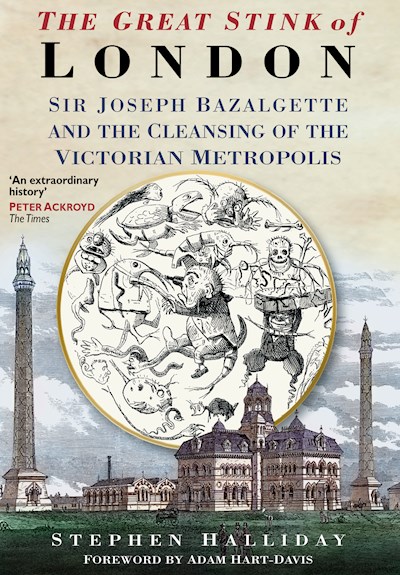 In the sweltering summer of 1858 the stink of sewage from the polluted Thames was so offensive that it drove Members of Parliament from the chamber of the House of Commons. Sewage generated by a population of over two million Londoners was pouring into the river and was being carried to and fro by the tides. The Times called the crisis "The Great Stink". Parliament had to act - drastic measures were required to clean the Thames and to improve London's primitive system of sanitation. The great engineer entrusted by Parliament with this enormous task was Sir Joseph Bazalgette, and this book is a fascinating account of his life and work. Bazalgette's response to the challenge was to conceive and build the system of intercepting sewers, pumping stations and treatment works that serves London to this day. In the process he cleansed the River Thames of the capital's sewage and helped to banish cholera, which in the mid-nineteenth century carried off over 40,000 Londoners. But this successful scheme was only one element in Bazalgette's wider contribution to the development of the Victorian capital. He also reclaimed land from the Thames to construct the Victoria, Albert and Chelsea Embankments, built bridges across the Thames at Putney, Battersea and Hammersmith, and created many notable new thoroughfares including Charing Cross Road, Northumberland Avenue and Shaftesbury Avenue. Stephen Halliday's enthralling social and personal history gives a vivid insight into Bazalgette's achievements and the era in which he worked and lived. The author traces the origins of Bazalgette's family in revolutionary France, the confusing sanitation system that he inherited from medieval and Tudor times and his heroic battle with politicians, bureaucrats and huge engineering problems to transform the face and health of the world's largest city.