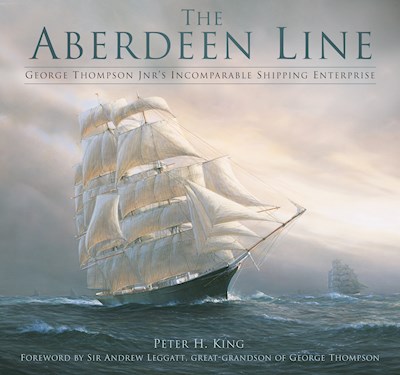 Founded in 1825 by the 21-year-old George Thompson Jnr, the Aberdeen Line developed over 100 years into one of the best-respected shipping lines in Britain. Initially engaged in the UK coastal, Baltic, North American, South American, China and Antipodean trade routes, before settling to become the longest-serving line on the Australian trade via the Cape, the name of Thompson’s Aberdeen was synonymous with the highest professional standards, with such jewels as the clipper Thermopylae and their first steamer, SS Aberdeen. The Aberdeen name navigated commercial takeovers by the Oceanic Steam Navigation Company, Shaw Savill and Albion, Lord Kylsant’s Royal Mail Group and Furness Withy, before becoming all but forgotten when it finally furled its sails in 1957. Here Peter King seeks to bring this once prominent shipping line’s history to light once more for the enjoyment of shipping enthusiasts and maritime historians everywhere.