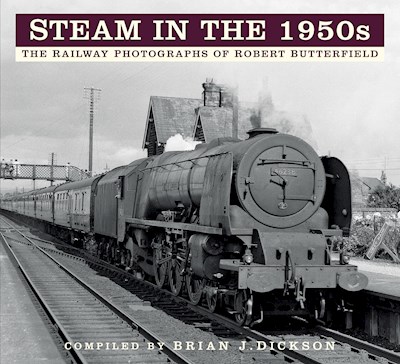 Robert Butterfield’s railway career started in 1950 when at 17 he joined British Railways as a clerk. This was swiftly followed by National Service in the RAF, but he returned to the railway in 1954, soon becoming station master on the Calder Valley Line at Luddendenfoot, then at Longwood and Milnsbridge and Goldcar stations. He finally retired from what had become Regional Railways in April 1993 having given 43 years of service. His photographs show how widely he travelled in the London Midland, Eastern, North Eastern and Scottish Regions, often featuring his favourite classes, Princess Coronations, Royal Scots and Jubilees. Brian J. Dickson has compiled a beautiful collection of Robert Butterfield’s railway photographs, providing a window into the past looking back at steam in the 1950s.