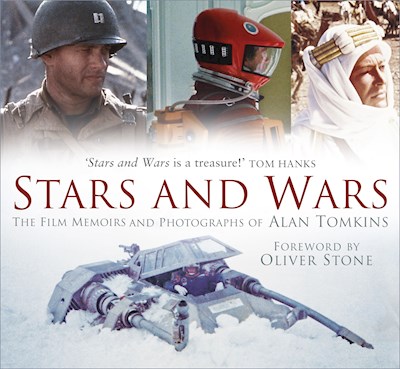 IN Stars and Wars, Oscar-nominated art director Alan Tomkins reveals his fascinating unpublished film artwork and behind-the-scenes photographs from an acclaimed career that spanned over fifty years in both British and Hollywood cinema. Tomkins’ art appeared in such celebrated films as Saving Private Ryan; JFK; Robin Hood: Prince of Thieves; The Empire Strikes Back (which would earn him his Oscar nomination); Lawrence of Arabia; Casino Royale; Battle of Britain; and Batman Begins. He shares his own unique experiences alongside these wonderful illustrations and photographs, charting his early work as a draughtsman through to becoming a celebrated and sought-after art director on some of the biggest blockbusters ever made. Having worked alongside such eminent directors as David Lean, Oliver Stone, Stanley Kubrick, Franco Zeffirelli and Clint Eastwood, Tomkins has produced a book that is a must-have for all lovers of classic cinema.