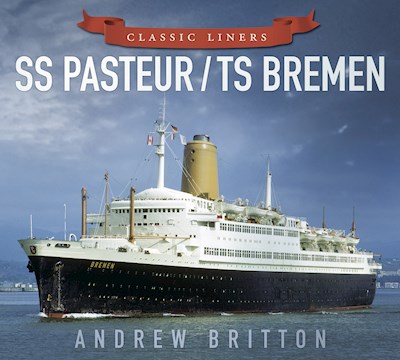 In the post-war era, TS Bremen was one of the most popular liners operating across the Atlantic – but she had a remarkable wartime history. Built for the French as the SS Pasteur, in 1940 she made a dramatic escape in the face of invasion, carrying 200 tons of French gold bullion reserves to Halifax, Nova Scotia. Requisitioned by the British, she became a hospital troopship and played a major support role in the Battle of El Alamein. Indeed, Charles de Gaulle claimed that Pasteur’s contribution ‘significantly helped bring . . . Hitler to his ultimate end’. Her sale in 1956 to North German Lloyd Line as their final flagship – refitted and renamed Bremen – sparked protest in France, but Bremen sailed on unperturbed, now the pride of the German nation. Though she had been celebrated as one of the safest liners ever built, Filipinas Saudi 1, as she was then known, sank in 1980 in the Indian Ocean. It was a sad ending to a life filled with glamour, excitement and danger. Here Andrew Britton tells the story of this distinguished and much-loved vessel in intimate and colourful detail.