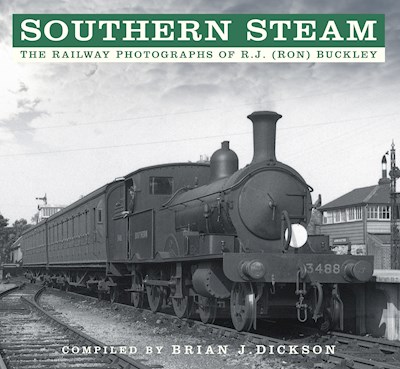 Ron Buckley’s evocative photographs reveal the changing scene of the Southern Railway, illustrating from the 1930s onwards those pre-grouping classes that were still working. These included the work of such well-known designers as Dugald Drummond and Robert Urie of the London & South Western Railway, the Billintons and Earle Marsh of the London, Brighton & South Coast Railway, and Harry Wainwright and Richard Maunsell of the South Eastern & Chatham Railway. Ron’s later photographs, from 1946 onwards, continue to show remaining working pre-grouping locomotives and also portray the newer Oliver Bulleid-designed Pacifics introduced in 1941. Visits to the Isle of Wight during the 1930s, ’40s, ’50s and ’60s enabled him to capture images of almost the entire fleet of locomotives working there during those four decades. Born in 1917, Ron Buckley has been photographing railways since the age of 15. He joined the London, Midland, Scottish Railway as a wages clerk in 1934 and retired in 1977 after over forty-two years’ service with the railways. Brian Dickson worked in publishing for over thirty-five years. Now a volunteer locomotive fireman and driver at a heritage railway, he has previously written Diesel Power in the North East and Scottish Steam (both The History Press).