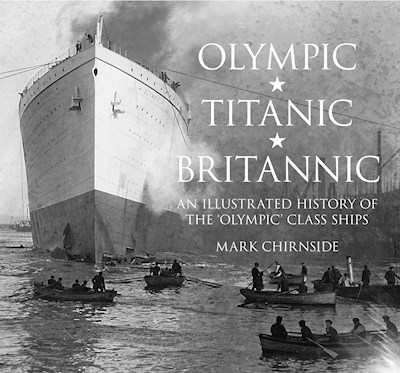 At the beginning of the twentieth century, competition between the North Atlantic shipping lines was fierce. While Britain responded to the commercial threat posed by the growing German merchant marine, there was also rivalry between the great Cunard Line and its chief competitor, the White Star Line. Against this backdrop Olympic, Titanic and Britannic were conceived. Designed for passenger comfort, they were intended to provide luxurious surroundings and safe, reliable service rather than record-breaking speed. Ironically, fate decreed that only Olympic would ever complete a single commercial voyage and she went on to serve for a quarter of a century in peace and war. Titanic's name would become infamous after she sank on her maiden voyage. The third sister, Britannic, saw a brief and commendable career as a hospital ship during the First World War, sinking in the Aegean Sea in 1916. Here maritime expert Mark Chirnside tells their story using previously unseen pictures, passenger diaries and deck plans, illustrating Olympic's successful career; the permature ends of her two unfortunate sisters; and the experiences of those onboard.