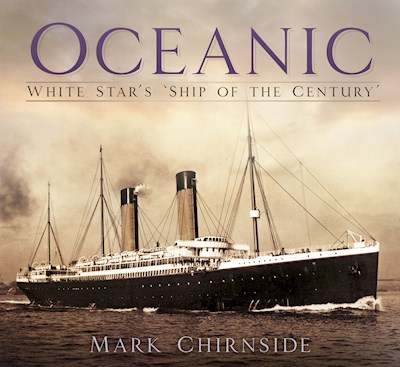 Oceanic was the largest ship in the world when she was launched in 1899. The White Star Line’s ‘Ship of the Century’, she was their last express liner before the Olympic and Titanic and her lavish first-class accommodation became renowned among Atlantic travellers. Serving on the company’s express service for fifteen years, she earned a reputation for running like clockwork. Days after the outbreak of war, she was commissioned into the Royal Navy and converted into an armed merchant cruiser. However, her new-found status was not to last – she grounded on the rocks off Foula, in the Shetlands, within weeks and became a total loss. When she was wrecked, she had on board Charles Lightoller, Titanic’s senior surviving officer. Oceanic: White Star’s ‘Ship of the Century’ is the first book that looks at the entire career of this one-of-a-kind flagship. With human anecdotes, hitherto unpublished material and rare illustrations, Mark Chirnside’s book is a beautiful tribute to a unique ocean liner.