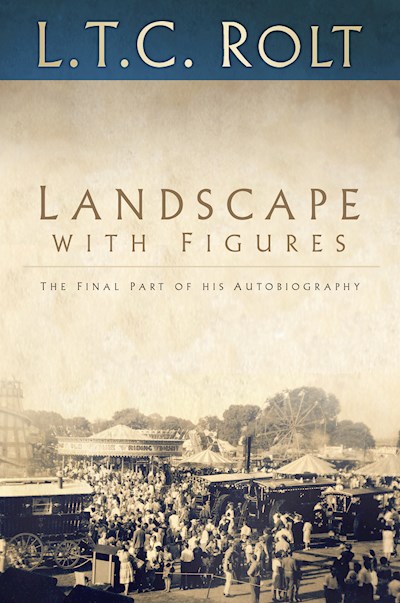 L.T.C. Rolt’s fame was born from his unique ability to produce works of literature from subject matter seemingly ill suited to such treatment – engineering, canals, railways, steam engines, agricultural machinery, vintage cars – such as in his classic biographies of Brunel, Telford, Trevithick and the Stephensons, and in his superbly written volumes of autobiography. In the first volume of Rolt’s stunning autobiography, Landscape with Machines, the focus was on his younger days, from childhood to trainee engineer, and his ambition to explore the inland waterways of England in his converted narrow boat Cressy. Landscape with Canals, the second volume, described Rolt’s meanderings through those water-lanes of England and Wales, combining his love for the English countryside with his life-long fascination with machines. In this book, written during the last years of his life, Rolt continues his intriguing and often diverse life story. He gives an account of the early days of the Talyllyn Railway Company and Preservation Society, describes his involvement in vintage and veteran car rallies, and vividly recreates his travels on the Tralee–Dingle Light Railway in remote West Kerry. Intermingled with these are his struggles to become a writer of repute. This final volume, published posthumously, completes a trilogy that is a fitting tribute to the man who, through his appreciation of the ‘aesthetics of technology’, could be said to have given a literary shape to the Industrial Revolution.