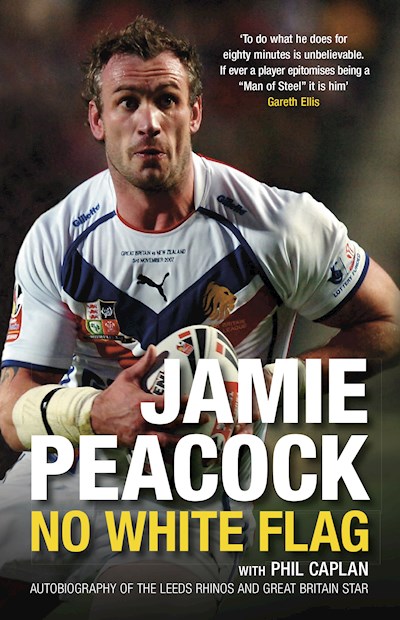 Jamie Peacock is the ultimate modern forward in rugby league. Taking the hard hits, making the toughest yards and leading by example in the Super League and international arenas, ‘JP’ has come through adversity, on and off the pitch, to become one of the most respected players of his generation. His strength, determination and unfailing will to win have seen him claim the ‘Man of Steel’ and ‘International Forward of the Year’ awards, along with a host of other individual honours, while picking up Super League titles and Challenge Cups with Bradford and Leeds. His autobiography No White Flag is a revelatory and inspirational account of a life in professional sport, from starting out as a skinny youth and being told he wouldn’t make the grade to dark days in hospital waiting rooms with his career hanging by a thread – culminating in the euphoria of winning the Grand Final with hometown club Leeds Rhinos and leading Great Britain to a historic series whitewash over New Zealand in the autumn of 2007. Forthright and to the point, Jamie pulls no punches in describing rugby league as he sees it. Replete with opinions and anecdotes, this book is essential reading for anyone with an interest in what it takes to become one of sport’s true gladiators.