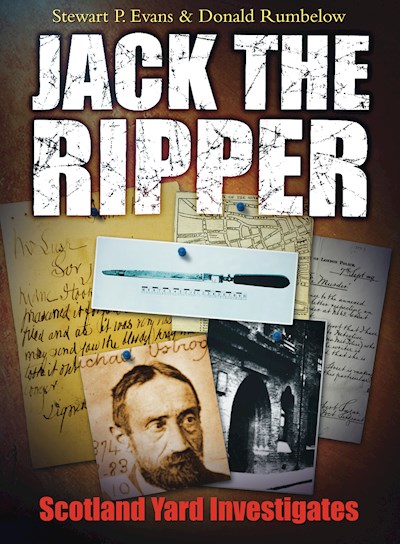 In 1888 the dreaded figure of Jack the Ripper stalked London’s East End murdering prostitutes. His crimes set in motion a huge police operation and have held a dark fascination over the public’s imagination for over a century, yet his identity has never been proved. Now, for the first time, two leading Ripper experts have joined forces to treat the case like a police investigation. Drawing on their unparalleled knowledge of the Jack the Ripper murders and their professional experience as police officers, they uncover clues that have remained undetected for over a hundred years. There are five ‘canonical’ Ripper victims, yet Scotland Yard’s ‘Whitechapel Murders’ files include another six suspected victims. Drawing the reader into the world of police investigation in Victorian London, Evans and Rumbelow reveal the conflict between the City and Metropolitan forces and the ridicule heaped on the police by the press. Investigating each murder, they conclude that only four of the eleven victims were actually killed by the Ripper. Perhaps most tellingly, they question the motives behind the destruction of evidence – particularly the message ‘The Juwes are the men that will not be blamed for nothing’, which was chalked on the wall near one murder site and rubbed out on order of the Chief Commissioner – and ask whether the enigmatic Dr Robert Anderson, officer in charge of the investigation, knew the Ripper’s true identity. Jack the Ripper: Scotland Yard Investigates strips away much of the nonsense that has accumulated since 1888 and reopens files on a case that will perhaps never be fully solved but will always fascinate.