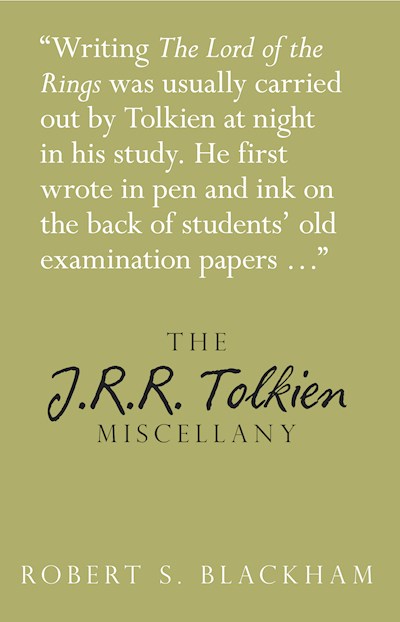 This miscellany explores the fascinating and enigmatic world of J.R.R. Tolkien, examining his place in literary history, his books and his iconic characters. The reader can explore facts and trivia from Tolkien’s life and works, including his early life in southern Africa and Birmingham, Tolkien on the silver screen, his role in the two world wars and his friendship with C.S. Lewis, as well as the places that inspired his fictional world of Middle-earth. Both light-hearted and highly informative, this miscellany offers an insight for new and old Tolkien fans into one of the great writers of the twentieth century. ROBERT S. BLACKHAM is a member of the Birmingham Tolkien Strategy Group and vice chair of The Shire Country Park Friends, a park named to commemorate J.R.R. Tolkien’s childhood connections with the area in Birmingham. The author gives talks and lectures about Tolkien in and around Birmingham and Oxford, and has made a large number of TV and Radio appearances in connection with this. He is the author of The Roots of Tolkien’s Middle-Earth (Tempus, 2006); Tolkien’s Birmingham (Mallorn, 2007); Tolkien’s Oxford (The History Press, 2008); The Pitkin Guide to Tolkien (Pitkin, 2011); Tolkien and the Peril of War (The History Press, 2011).