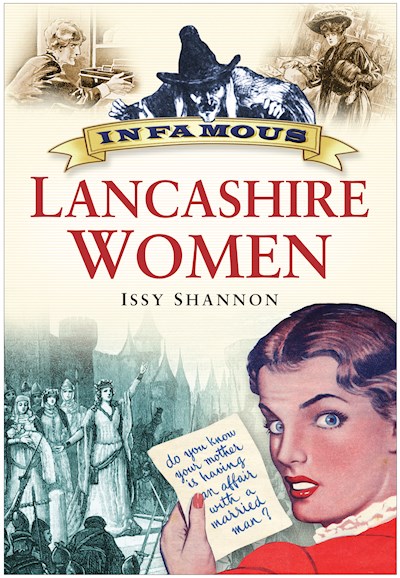 From the notorious Pendle Witches, whose nefarious activities in the seventeenth century led to death and disaster, to the reviled Myra Hindley, the most hated woman in modern criminal history, Issy Shannon's new book is a riveting roll-call of Lancashire women truly deserving of the title 'infamous'. Apart from the violent and vengeful Queen Margaret of Anjou, who led the Lancastrian cause in the Wars of the Roses and Florence Maybrick, southern belle from the USA, all the women are Lancashire lasses through and through. From the conniving Liverpool sisters who callously murdered purely for profit, to the garrulous Wigan poisoner who talked her way onto the scaffold. Meet the wretched Mary Ann Britland of Ashton-under-Lyne, named by executioner James Berry as 'the worst woman I ever hanged', and his namesake, Elizabeth Berry, dubbed by the press 'Lancashire's Lucrezia Borgia'. Alongside the Manchester baby-farmer and the unfortunate Lady Mabel Bradshaw of Wigan, who unwittingly committed bigamy, are witches, fraudsters, cross-dressers and thieves and women notorious as mistresses to the highest in the land. Following the success of her first book, Infamous Yorkshire Women, in which Issy plumbed the depths of female depravity and degradation, the author has crossed the Pennines to discover their opposite numbers in the Red Rose County.