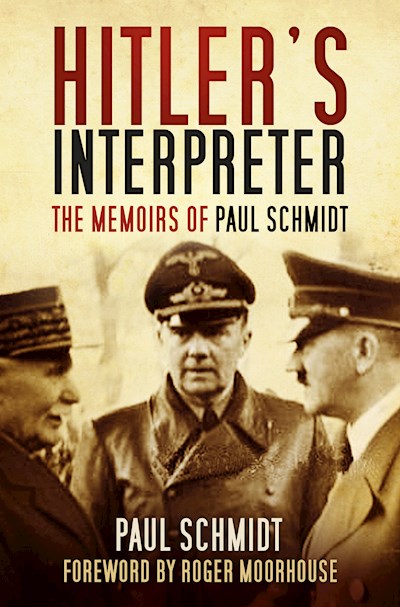 As an interpreter in the German Foreign Ministry, Paul-Otto Schmidt (1899–1970) was in attendance at some of the most decisive moments of twentieth-century history. Fluent in both English and French, he served as Hitler’s translator during negotiations with Chamberlain, the British declaration of war and the surrender of France, as well as translating the Führer’s infamous speeches for radio. Having gained favour with the Nazi Party – donning first the uniform of the SS then that of the Luftwaffe – Paul Schmidt was given ‘absolute authority’ in everything to do with foreign languages. He later presided over the interrogation of Canadian soldiers captured after the 1942 Dieppe Raid. Arrested in May 1945, Schmidt was freed by the Americans in 1948. In 1946 he testified at the Nuremberg Trials, where conversations with him were noted down by the psychiatrist Leon Goldensohn and later published. After the war he taught at the Sprachen und Dolmetscher Institut in Munich. Hitler’s Interpreter presents a highly atmospheric account of the bizarre life led behind the scenes at the highest level of the Third Reich. Roger Moorhouse is a historian of the Third Reich. He is the author of the acclaimed Berlin at War, Killing Hitler and The Devil’s Pact. He has contributed to He Was My Chief, I Was Hitler’s Chauffeur, With Hitler to the End and Hitler’s Last Witness.