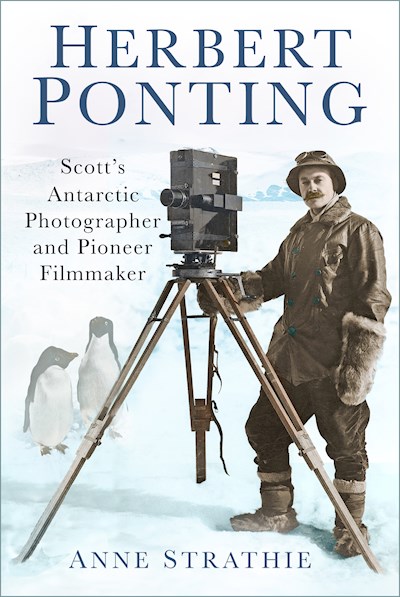 Herbert Ponting (1870-1935) was young bank clerk when he bought an early Kodak compact camera. By the early 1900s, he was living in California, working as a professional photographer, known for stereoview and enlarged images of America, Japan and the Russo-Japanese war. In 1909, back in Britain, Ponting was recruited by Captain Robert Scott as photographer and filmmaker for his second Antarctic expedition. In 1913, following the deaths of Scott and his South Pole party companions, Ponting’s images of Antarctica were widely published, and he gave innovative ‘cinema-lectures’ on the expedition. When war broke out, Ponting’s offers to serve as a photographer or correspondent were declined, but in 1918 he, Ernest Shackleton and other Antarctic veterans joined a government-backed Arctic expedition. During the economically depressed 1920s and 1930s, Ponting wrote his Antarctic memoir, re-worked his Antarctic films into silent and ‘talkie’ versions and worked on inventions. Like others, he struggled financially but was sustained by correspondence with photographic equipment magnate George Eastman, a late-life romance with singer Glae Carrodus and knowing that his images of Antarctica had secured his place in photographic and filmmaking history.