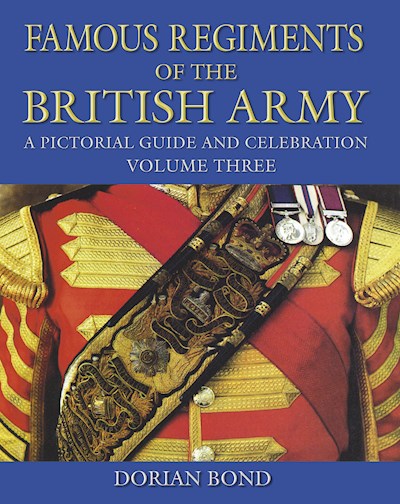 This book, a continuation of volumes one and two, completes the study of more than a hundred British regiments all of whom played more than important roles in world history. In testing times, on foreign adventures victorious, glorious and sometimes disastrous, they have helped shape the history of the British Isles. In this third volume thirty-four regiments are featured – their battle honours, badges and most famous sons – including the stories of the heroic actions of their Victoria Cross holders. Each regiment’s section includes artworks and photographs illustrating insignia, uniforms and soldiers in action down through the centuries. While the tales of courage and loss are in themselves enthralling, Dorian Bond divulges many interesting facts about these unique bodies of men: how did the 22nd (Cheshire) Regiment get their acorn and oak leaf badge? Which South Staffordshire man became the inspiration for Terence Rattigan’s The Winslow Boy? Did you know that a princess wrote ‘The Royal Windsor’ quick march for the 29th of Foot, later the Worcestershire Regiment? Covering action wherever the regiments found it, from the High Veldt of South Africa to the grim trenches of Passchendaele and from the disaster of Dunkirk to the triumph of Waterloo, Famous Regiments of the British Army Volume Three tells the stories of some of the world’s most famous battles and the role these regiments played in them.

The German 66th Regiment in the First World War