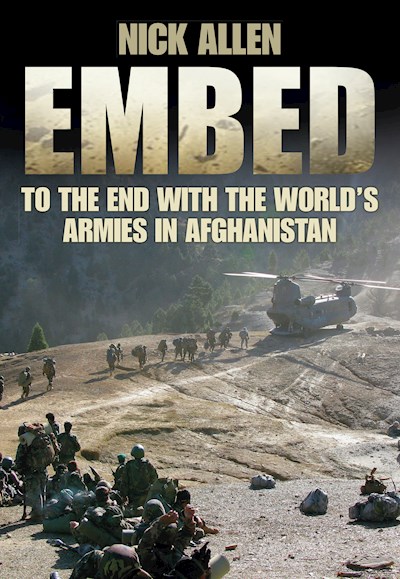 In 2007, journalist Nick Allen quit a secure job in Pakistan as a news agency writer to experience the life of foreign troops fighting the Taliban in Afghanistan. Over several years he journeyed as an embedded reporter with a dozen armies, working his way through placid backwaters to remote, savage hotspots where daily clashes with insurgent forces were the norm. Driven by a desire to himself live and then convey some of the drama, tragedy, farce and sheer frustration experienced by soldiers and marines from California to Copenhagen, Allen returned again and again for ‘embeds’ with different contingents to explore a multinational effort that will surely define NATO’s future and events in South Asia, and the world, for many years to come. No other writer managed to gain such broad access to the forty-two-country Coalition that was deployed in Afghanistan, or produce an account that carries so much of the essence of soldiering in this inhospitable environment, where extremes of climate, treachery and enemy cunning have always defeated nations that dared to wage war in the ‘graveyard of empires.’ Embed explores the fragile calm of Bamiyan and its ancient sites and other low-intensity regions – usually ignored but a vital part of the overall picture – together with the ferocious clashes of Helmand, Kandahar, Kunar and other provinces. The author found that even the most sophisticated armed forces had been sucked into a fight they were ill-prepared for and, amid political uncertainty and dwindling public support back home, ultimately could not win.