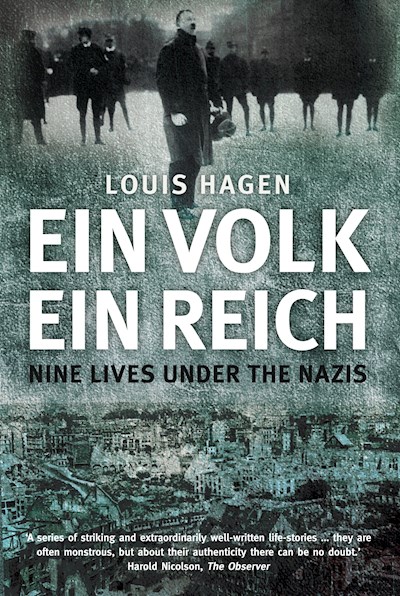 When Louis Hagen returned to Berlin immediately after the war, having survived not only incarceration and torture in a German concentration camp but also the Battle of Arnhem, it was through a desire to see the great German eagle toppled, its talons drawn. The son of a wealthy Jewish banker, he had seen his family flee their home, and many of his relatives had died at the hands of the Third Reich. He wanted to understand the German people; why had so many welcomed the Nazi Party, and were they now humbled and wiser? Hagen interviewed nine people he had known before the war who represented a wide spectrum of German society. They were an SA officer, a businessman, a doctor, a socialite, a journalist, a professional soldier, an SS wife, a member of the Hitler Youth and a mischling, or half Jew. Four were Nazis, three were collaborators, and two were anti-Nazi. The very fact that none of these people was a high-ranking Nazi official or a survivor of the Holocaust provides an insight into the Third Reich that is a revelation even for those who know this period of history intimately. How could the Baroness sent to Theriesenstadt concentration camp hold salons for ex-Nazis after the war? Through the lives of nine ordinary Germans, tracing their experiences of Nazism from the first hopeful days until the horrors of the Russian occupation of Berlin, Louis Hagen provides a salutary and unforgettable record of the German people in the shadow of the swastika.