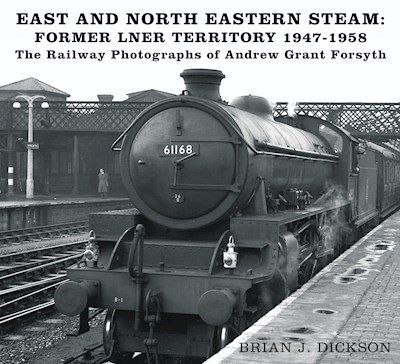 Andrew Grant Forsyth’s impressive catalogue of photographs show the changing scene of locomotive power across the former LNER territories from Newcastle to North London, from 1947-1967. It features a wide variety of locomotives from the former Hull and Barnsley Railway tanks to the former North Eastern Railway ‘Q’ classes, Nigel Gresley designed class A3 and A4 and the Arthur Peppercorn ‘Pacifics’. The stunning, unpublished images come all parts of the former LNER territory from Newcastle to Darlington, Doncaster, York, Nottingham, Norwich and numerous sites in the north London area, and include a visit to the remote East Anglian branches in 1952, but the greater part of this selection shows locomotives and workings in the former North Eastern region of British Railways.