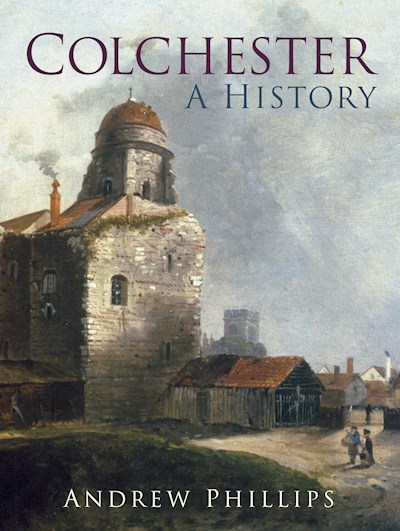 Colchester boasts 2,000 years of history. Few towns in Britain can equal that. Yet this new book, by a local author, is the first full and concise history of Colchester to be published for over half a century, during which time our knowledge of the town’s past has grown immeasurably. The Iron-Age capital of King Cunobelin (Shakespeare’s Cymbeline), Colchester was the target of the Roman invasion in AD 43. Where the Emperor Claudius received its submission, the Romans built a legionary fortress, the framework of which still forms the centre of Colchester. As capital of Roman Britain, Colchester was overrun and burnt by the warrior queen Boudica (aka Boadicea), then rebuilt and ringed by its famous walls. After Rome fell and the Saxon incursions began, the Saxon King Edward the Elder made it the leading town in Essex. The Normans raised its profile higher, when an Abbey, a Priory and a great castle gave it the strategic defence of Eastern England. It was besieged only once, when King John was in conflict with his barons over Magna Carta. For 400 years Colchester’s cloth industry placed it among the top fifteen towns in the kingdom. It saw Protestants burnt at the stake, withstood a Civil War siege, was ravaged by plague and stood in the front line against invasion, first by Napoleon, then by the Kaiser, then by Hitler. An important engineering town since Victorian times, it is today a regional shopping centre, a major garrison town and a popular tourist attraction. This authoritative, readable and well illustrated work, from a professional historian, will doubtless become the standard work on this ancient town for at least the next half-century.