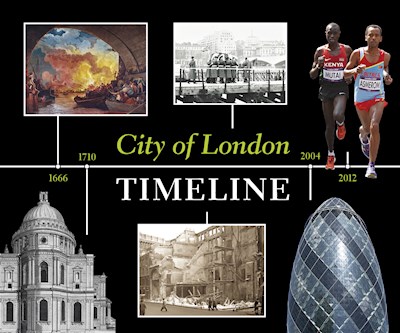 The City of London is the heart of the capital. The oldest part of London, its ancient relics include a Roman Amphitheatre and the remains of the City’s Roman wall. It is the only city mentioned in the Magna Carta – signed 800 years ago – and its ‘ancient liberties’ and traditions are unique. World-famous landmarks such as St Paul’s, the Monument, the Bank of England, the Old Bailey and the Royal Exchange stand beside some of the most cutting-edge architecture in the world including the Gherkin and ‘the Cheesegrater’. With 100 stunning illustrations and 200 events – ranging from the Great Fire of London to the day an elephant arrived at the Tower, and culminating in Her Majesty The Queen’s 90th birthday celebrations – it offers a delightful, richly illustrated tour through 2,000 years of extraordinary history.