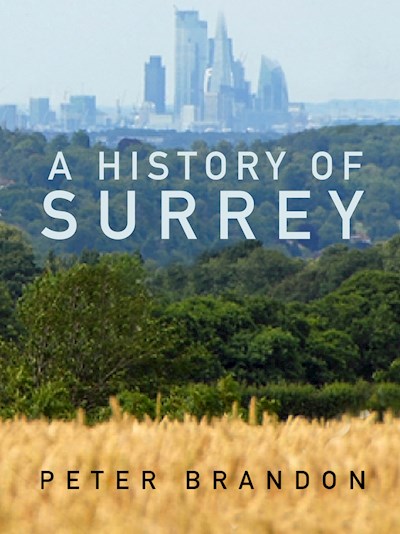 Surrey reveals an indomitable character, in its life and scenery, which has survived the relentless advance of London.

There is much in the history of Surrey of significance in the wider history of England, indeed of Europe. The county affords good examples of prosperous peasant life at the woodland margin in the Middle Ages, and had some of the best developed industry before the Industrial Revolution. One of the first places in which men cultivated a sense of natural beauty and escaped from the turmoil of the city into the peace of the countryside, the landscape gardening which has made Surrey unrivalled in its beautifully contrived scenery is a major contribution to the arts of Western Europe. However, the author gives due prominence to the contribution of generation of ordinary Surrey folk who, as they lived their quiet, virtually unknown lives, stamped their personality on the county.

Dr Brandon’s first edition of this book, in 1977, was widely praised for its original and perceptive analysis of the tension between the ancient rural country and its burgeoning and intrusive neighbour, the metropolis. Updated in this new paperback edition, A History of Surrey remains a taut yet comprehensive text that will appeal to those in both urban and rural parts of ancient Surrey.