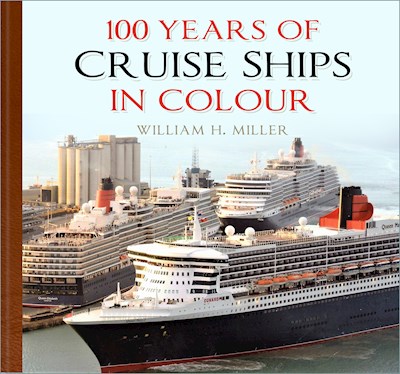 This latest book from William H. Miller presents 150 photographs, all in rich colour, across a span of almost 100 years: from the 1920s to the start of the current cruising boom.

It includes many early, often seasonal, liners; then the more purposeful generation of ‘floating hotels’ that began in the 1960s. There are favourites, such as the pre-Second World War Franconia, Reliance, Nieuw Amsterdam and Normandie; then, in greater numbers, a ‘fleet’ starting from the 1950s and ‘60s – ships such as the Caronia, Andes, Queen of Bermuda, Nassau, Italia, Bahama Star, Reina Del Mar, Oceanic, Skyward, Song of Norway, Hamburg, Royal Viking Star and Queen Elizabeth 2. Finally, steaming into the twenty-first century, we see the likes of the Royal Princess, Statendam, Crystal Symphony, Oriana, Queen Mary 2, Allure of the Seas and Viking Star.