Zeppelins on the East Coast

At the beginning of 1915 the Kaiser sanctioned the use of Zeppelins to bomb military and industrial targets in England. So on 19th January 1915 three Zeppelins, L3, L4 and L6 took off from their bases in Germany, each with 16 men, armed with 8x110Ib high explosive and 11x25Ib incendiary bombs, and headed for England.

All of the airships were the new M Class Zeppelins which had Maybach engines which could give them a top speed of 50 mph and they could reach a height of 5,000 feet. L3 was commanded by Kapitänleutnant Hans Fritz; L4 was in the command of Kapitänleutnant Count von Platen-Hallermund; and L6, although in the command of Captain Oberleutnant Freiherr von Buttlar, was also graced with the presence of Korvettenkapitän Peter Strasser who was the overall commander of the Imperial German Navy’s Zeppelin Fleet. L6 encountered problems and had to turn back. Zeppelins L3 and L4 were supposed to bomb north-east coastal towns and fly up the River Humber. But it was not to be and both Zeppelins ended up off the coast of Norfolk arriving roughly at the same time. It is not known for sure how they were 70 miles off course but it was either through weather conditions or navigation errors.

Zeppelin L3, under the command of Kapitänleutnant Hans Fritz, crossed the Norfolk coast between Happisburgh and Winterton. The first bomb, an incendiary, landed in a waterlogged field on George Humphrey’s land at Little Ormesby causing no damage. The next bomb, another incendiary, fell to the rear of Norwood Suffling’s house on Albermarle Road and caused a crater two feet wide but no casualties. The first high explosive bomb to land hit the pavement at the back of 78 Crown Road, but it failed to explode. The fourth bomb fell on St Peter’s Plain and the spinster Martha Taylor and shoemaker Sam Smith became the first civilians to be killed in an air raid with two more being injured. The blast also blew out the front of St Peter’s Villa and seriously damaged Pestell’s Buildings. The fifth bomb failed to explode and was recovered from a stable owned by the butcher William Mays in Garden Lane, near South Quay. Bomb number six fell outside the First and Last Tavern on Southgates Road and the third incendiary to be dropped fell between two vessels and caused some damage to Beeching’s South Dock. Luckily there were no casualties.

The eighth bomb bounced off the Stone Quay at Trinity Wharf, narrowly missing a sentry and a crane turntable, before it fell into the river. Bomb number nine, another explosive bomb, fell behind the Fish Wharf, causing extensive damage to the rear as well as destroying the Fish Wharf Restaurant Rooms and bursting a water main, one person was slightly hurt by flying glass. The final two bombs dropped by L3 damaged the steam drifter Piscatorial and struck the road running along the back of the old racecourse grandstand on South Denes, killing a large black dog and destroying a fence. L3 then flew out to sea where it is recorded in Der Krieg Zur See that they left the English coast in rain and fog.

Zeppelin L4 navigated the Norfolk coast and dropped a flare and two incendiary bombs on Sheringham which caused a lot of damage but no casualties. Having flown back out to sea L4 then reappeared where it dropped another incendiary in a field between Brancaster Staithe and Hunstanton. A fourth incendiary was then dropped close to Brancaster church which landed in a road close to the Red Cross hospital. The Zeppelin flew onwards and the fifth bomb is reported to have been a high explosive bomb aimed at the wireless station at Hunstanton. However, there are conflicting reports over this bomb, and it is suggested that this may not have even been dropped. Therefore the next two confirmed bombs to fall landed at Heacham, one exploded in Lord’s Lane where a number of people had narrow escapes and the seventh bomb failed to explode and was found in a field.

Bomb number nine landed at Snettisham, near the church which, it was believed, was the actual target. The Zeppelin flew between Wolferton and Sandringham before flying over Dersingham. What is interesting about this aspect of the raid is that there was the belief that the intended target was the Royal Family. Zeppelin L4 did not target the house and there is no evidence to show that they were the targets, but part of the propaganda after the raid was directed at the belief that the sole purpose of the raid was to bomb the house. Eventually L4 was able use a railway line to reach the Gaywood District in King’s Lynn and the first bomb to land fell in a field at the rear of Tennyson Avenue. The next fell on allotments but the next one caused fatalities when it hit houses on Bentinck Street killing Percy Goate, aged 14, and Alice Gazely, aged 26. Both are reported to have died from shock. L4 dropped another bomb on some terraced houses where it made a large hole and wrecked a blacksmiths but caused no fatalities. The fifth bomb to fall on King’s Lynn fell in a garden by the docks failing to explode, the sixth destroyed an engine at Alexandra Dock.

The last two bombs fell at and around Cresswell Street where the family at No 63 had a lucky escape when an incendiary hit the house causing a fire which was extinguished by neighbours. This final bomb was placed in water by the police and taken into their care. In total the raid on King’s Lynn led to two fatalities and thirteen injured. After the raid, L4 headed east and actually flew past Norwich, which was luckily shrouded in fog and had its lights out, and then was seen to pass Acle and then flew out to sea to the north of Great Yarmouth. 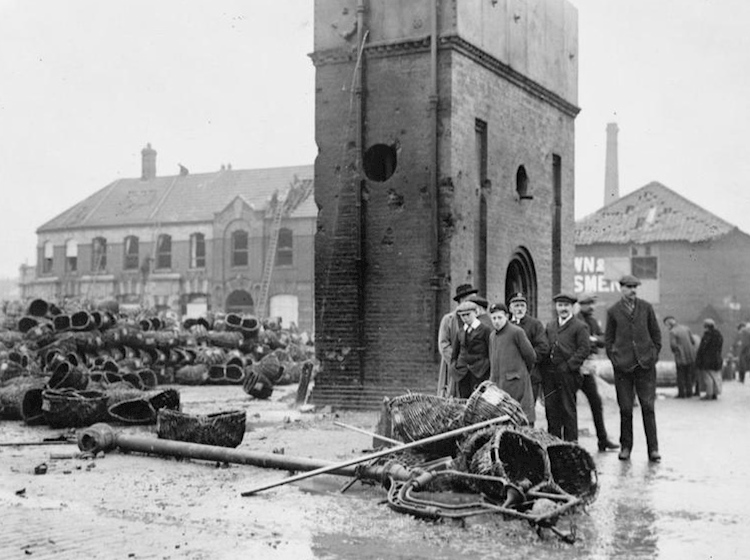 Bomb damage at the Fish Wharf in Great Yarmouth 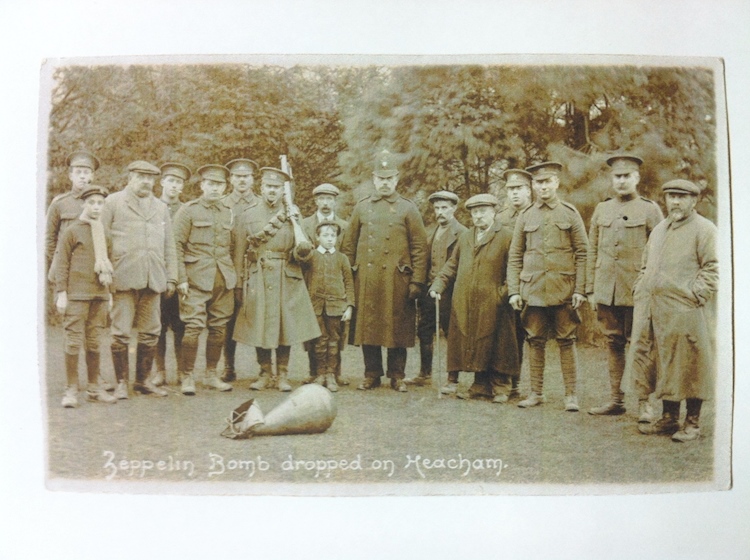 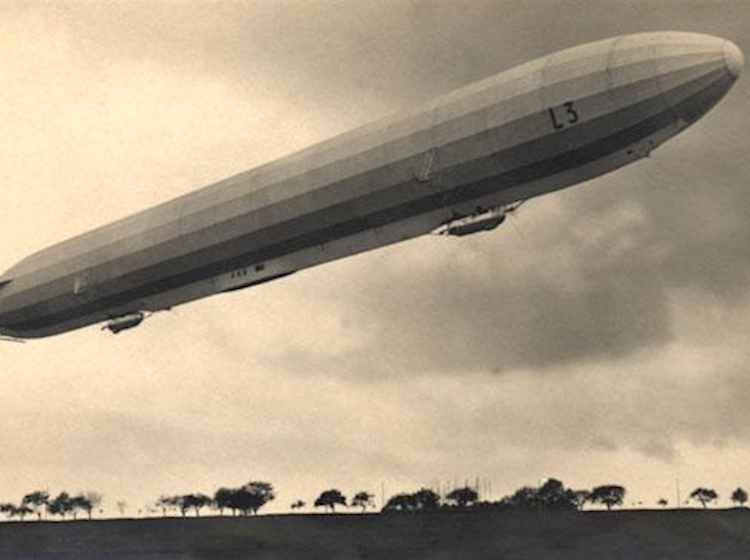