Yorkshire, the county that gave the word the cat’s eyes, the White Rabbit featured in Alice in Wonderland and stainless steel. A county that boasts the birth of Marks and Spencer and is home to the biggest maze in the UK. It’s surrounded by beauty, endless fields of green and brown, perfectly rested under the golden sunset that illuminates the evening sky.

But there’s another side to ‘God’s own country’. A side that few get to experience but those that do will never forget. This is the Yorkshire that the tour board neglected to mention…

In the early nineteenth century, Thomas Busby got into a quarrel with his father-in-law, one Daniel Auty. With both men possessing unsavoury characteristics, the fight quickly escalated and ended only with Auty’s lifeless body being dumped in the nearby constable’s stables.

After being tried and convicted of the murder, Busby’s last wish was to have a drink in his favourite chair. The request was granted and with his final sip he cursed anyone that dare place their bottom upon his beloved seat.

The local tavern acquired the infamous chair and placed it in pride of place, even rebranding their business as The Busby Stoop to increase trade, but the story didn’t end there. Over the years numerous people have sat in Busby’s chair for a thrill or a dare but not all of them lived to tell the tale.

Two Royal Air Force pilots sat in the hexed seat before fatally crashing their car on their journey home and a builder placed his bottom on the fabric before falling off of an extension that he was building later that same day. The chair is now on show in Thirsk museum, nailed high up on the wall to prevent any further unfortunate happenings.

The workhouse museum in Ripon is the only complete workhouse left and it truly transports its visitors back in time. The whole place is filled with the stench of tragedy and the museum pieces housed within act as trigger objects that almost thrust visitors into the workhouse life.

But beyond the history and guided tours of the place lies an even more chilling phenomenon. Tales even more wretched than the lives of its previous inhabitants. Numerous guests and staff members have reported ghostly whispering, disembodied cries, strange footsteps and even shadows moving around, almost following the guests as they explore this fine piece of history. Perhaps even death wasn’t enough to release the souls of the previous residents.

To anyone unfamiliar with this location it would appear to be an unremarkable ex-council house on an unremarkable street. But for those that dare stay the night, they might discover the secrets this house allegedly bears. Back in the early 1960s the Pritchard family moved into the home but within a short time, their son spotted strange chalk dust appearing out of thin air. Something that was also witnessed by his grandmother.

Soon after, unexplained puddles of water began to form around the kitchen before a strange green slime allegedly leaked from the taps. The phenomena quickly escalated as ‘Fred’ the poltergeist began scratching and biting the occupants.

The final straw came for the Pritchard’s when their young daughter was all but throw down the stairs in front of their very eyes. The story quickly spread, and the once unremarkable house soon became known as the home of the most violent poltergeist in Europe!

On the 4 of July 1838, heavy rained poured from the skies above before making its way down into Huskar pit. Below the surface many children worked tirelessly in almost total darkness to bring a few pence to a meagre family table. As the water rushed in, the frightened children joined a drift that headed out towards Nabs Wood. Sadly for them, a stream high above Huskar Pit, broke its bank and even more water rushed in transforming the gentle drift to a raging torrent.

The children were thrust around violently before their tiny bodies were eventually washed out into Nabs Wood. The scene was absolute carnage and miners, locals and the authorities worked hard to remove the debris of fallen trees and rocks to recover the children’s bodies. A ten-year-old named George Burkinshaw was found clutching the body of his seven-year-old brother, James.

Ever since that fateful day, people have claimed to have experienced a whole range of strange phenomena within Nabs Wood. The ghostly calls of the imp-like spectres echo through the trees and the laughing and playing of children is heard on a regular basis, only for the bewildered spectator to discover they are alone within the woods. Light anomalies, electrical disturbances and temperature fluctuations are all experienced here on a regular basis. 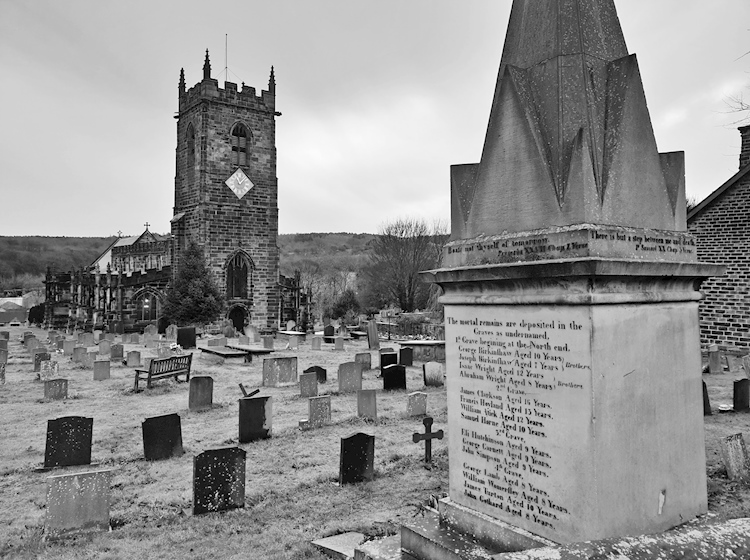 The rural country lane offers, for most, nothing but scenic views of the grand Yorkshire countryside. But for one banker driving along the lane on a stormy night back in 1997, it appeared the picturesque location housed something unworldly.

He claimed that whilst his car had broken down, he wandered along the road towards a brightly lit guesthouse in search of shelter and assistance. The guesthouse was eerily perfect with what he described as a 1950s theme. During that night he was fed, watered and assisted before leaving the following morning. The experience became even better as he was informed there would be no charge.

The chap thanked the staff and wandered back to his car as he awaited the roadside assistance. After telling the mechanic all about his evening, he was informed there were no hotels or guesthouses along that stretch of road. With the car back in action, the man drove up and down Coppleflat Lane but discovered the phantom guesthouse had vanished into thin air.

The darker side of history