Wonders of the UK’s waterways

It was during the eighteenth century, when Britain was bursting with trade, industry and commerce that the great age of canal building was born.

Manufacturing was changing – local craftsmen were being replaced by factories where goods could be mass produced, on an unprecedented scale. Finding efficient ways to transport the raw materials to the factories, and the finished product from them, was now vital.

Britain’s roads were in the process of being improved, but they still couldn’t handle heavy materials like coal and steel, or the fragile materials that required a smooth journey. Roads, it seemed, couldn’t compete with water.

Granted, there were already an abundance of navigable rivers in Britain – but there was just one hitch…they didn’t go to the right places anymore. The industrial North and the Midlands were not connected to the South, where the majority of consumers were located.

As a result of this demand, the third Duke of Bridgewater, Francis Egerton, decided to build a short canal to link the River Irwell with his coal mines in Worsley. The river Irwell led directly to Manchester, which had an ever-growing appetite for coal to feed power to its many mills.

The Bridgewater Canal was opened in 1763, and although it never linked to the River Irwell as originally planned, a half century of canal building was triggered because of Egerton’s example.  When his canal opened, the price of coal in Worsley was halved overnight.

Today, canals mean so much more to the UK than simply being a commercial resource. These remnants of our industrial past now make beautiful places to float, fish, ride or walk, and there are now more boats on our waterways than at the height of the Industrial Revolution.

So, let’s look back through time, at the key points of interest that make up our beloved waterways…

Bow Locks is steeped in a rich history – constructed in 1850, it initially served as a pound lock for barges to pass through. Bow Locks was extremely popular when first constructed, mostly because it was toll free. So, when the lock’s owners decided to introduce a toll system it faced a massive backlash.

An innovative compromise was reached. Next to the lock were flood gates, which provided the same access to the canal – but only when the tide was right. These gates were kept completely free, but the lock would still have a toll. That way, boat owners had the choice between the two – if they got the time of day just right!

Designed and built by John Rennie and first opened in 1810, Caen Hill Locks were the final section of the Kennet and Avon Canal to be built.

When the locks were first constructed, they had to be close together in order to climb the hill – however, this meant there wouldn’t be enough water to operate them. To solve this issue, Rennie built a series of long ponds that ran down the side of the towpaths, feeding into the locks when needed.

The UK’s waterways were fundamental in transporting vital supplies to troops during both World Wars. The Kennet and Avon canal was no different, and so the locks were left derelict after the Second World War.

Luckily for us, it was restored and reopened by the Queen in 1990. In 2010, the locks were replaced with sixteen new lock gates to reduce water wastage. Today they take a staggering 5-6 hours to traverse a boat through!

Even though Shardlow has been a meeting point for trade since the Bronze age, its trade only really started thriving following the opening of the Trent and Mersey Canal in 1770. Suddenly, there were routes spanning every direction in which the goods could travel – a heaven for traders.

High quantities of coal, iron, cheese, and salt (to name a few) travelled down the Humber Estuary to Shardlow, where they were divided between narrowboats to ship down the canal routes, or loaded onto carts to travel by road.

In it’s heyday, around 1816, Shardlow’s population had grown from a few hundred people to over a thousand, with a dozen warehouses, offices and stores. Today, although it is no longer a working wharf, Shardlow is known as ‘Britain’s most complete surviving example of a canal village, with over 50 Grade II listed buildings’.

The Kings Norton Stop Lock is the only guillotine-gated canal stop lock in existence. It was built between 1793 and 1816 to control the flow of water from the new Stratford Canal into the lower level Worcester and Birmingham Canal.

Canal gates were a point of pride during this time and canal companies were fiercely protective of their own water supplies. They therefore sought to separate them at all costs, and many canal gates were created as a result. The Kings Norton Stop Lock is one of the best examples of this.

It has worked flawlessly ever since, with its cast iron design thought to be completely unique.

Thomas ‘Man of Iron’ Telford was responsible for creating the Chirk Aqueduct. The 70-foot-high and 710-foot-long aqueduct spans the Llangollen Canal, and it was the tallest aqueduct ever built when it was completed in 1801.

Its design was based on Telford’s previous aqueduct that he built over the Shrewsbury Canal. Unusually, the Chirk Aqueduct doesn’t have a single, long, cast-iron trough to carry the canal’s water – it is pieced together from a bed of thick iron plates.

The aqueduct has stood firm to this day, with the help of some extra iron side plates that were added in 1870. Its success meant that Telford stuck with a similar design for his other aqueduct further down the Llangollen Canal – the Pontcysyllte Aqueduct.

The success of the Industrial Revolution was mostly down to the novelty of being able to transport huge quantities of goods across the UK, thanks to its expanding canal network. However, there was still one big barrier that divided the North of England from the South – the Peak District.

Plans were swiftly put in place to resolve this issue by constructing the Peak Forest Canal. A three-storey warehouse, Whaley Bridge Wharf, was constructed as a part of the canal in 1801 at Whaley Bridge. Straddling the water, it primarily served as a goods interchange for the transfer of limestone.

Due to its success, by 1832 the warehouse was expanded to its now renowned three-tier build to accommodate extension sidings for trains. By this point, it was a major exchanging point between canal and rail.

Most canal locks consist simply of a bottom lock and a top lock, with boats being transferred from one to the other. The Bingley Five Rise locks, however, form what's known as a ‘staircase’ flight, where the lower gate of one lock forms the upper gate of the next.

The eighteenth century engineering masterpiece is unique in being the only Grade I listed structure on the Leeds-Liverpool canal and was designed by John Longbotham. A crowd of 30,000 turned out to celebrate its opening in 1774.

The very first boat to use the locks took just 28 minutes – a true testament to how well it was built. Over 200 years later the flight is still in daily use, providing access to 16 miles of lock-free cruising on the Leeds-Liverpool canal.

History of the Waterways 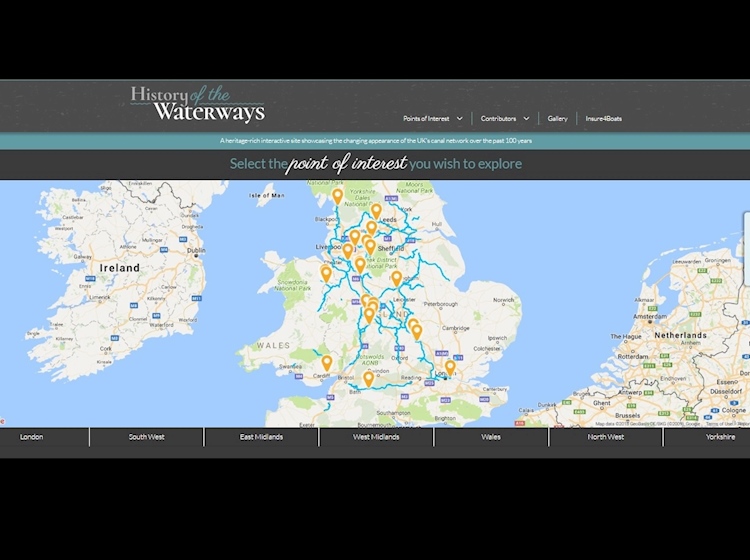 Explore the History of the Waterways map

With this much history under its belt, the UK’s waterways have a legacy to be truly proud of. With so much heritage between then and now, it’s no surprise that the waterways have changed greatly in appearance over the course of their history.

That’s why Insure4Boats have created a cutting-edge interactive site to showcase just how much the appearance of the UK’s canal network has changed over the past 100 years.

For the full, immersive experience, choose your region or click any of the points of interest locations on their UK map, where you can compare past and present photos of each one side-by-side. Not only that, the site also provides even more history, unusual facts and nearby curiosities for each location, bringing them to life even more.

The historical insights have been provided by John Benson, who looks after The Waterways Archive, based at the National Waterways Museum Ellesmere Port. With over 25 years’ experience of studying the wonders that the UK’s canals have to offer, there’s no one better to tell their stories!

The only thing left to do is explore the fascinating History of the Waterways for yourself – where will you be inspired to visit next?