Where does Halloween come from?

While Christmas is linked with the winter solstice and the birth of the Child of Light, often called Mabon, an Macan or Mapanos. Easter is linked to the spring equinox, falling on the Sunday following the full moon after the equinox – which is why it is different every year. Halloween is short for All Hallows Eve, which is on the 31st of October, the day before All Souls Day.

Halloween was introduced by Christian authorities to replace the ancient festival of Samhain (as it was was called in the Irish language, Gaeilge). Samhain today is the name for the month of November, as well as the ancient festival of the dead. In Scotland it was called Samhuinn in Scots Gaelic and in Welsh it is Calan Gaeaf and in Gaul it was referred to a Samonios, refered to on the Coligny Calendar in the phrase TRINVX SAMO SUNDIV, which translates roughly as “the three nights of the end of summer”.

Generally it is regarded that Samhain derives from the words sam-fuin, meaning the end of the summer, which would tie in with the Gaulish terminology. Although in modern terms, summer ends in August, the Celtic year was split into two halves rather than four quarters. The end of October was pretty much the cut-off point for any good weather, a dramatic shortening of the day, the falling of the last leaves and the end of any harvesting of food. So, purely from a practical point of view, it makes sense to have regarded it as the end of summer (samhradh) and the beginning of winter (geimhreadh).

In neo-Paganism, the Celtic New Year is at Halloween/Samhain, the 31st of October, although this is not the universally accepted date for Samhain. There is strong evidence to suggest that pre-Christian Celtic peoples of western Europe not only celebrated the festival of Samhain, but that they also regarded it as the New Year. In Celtic culture the day began at sunset and ended the following sunset – night preceeding daytime. It was the same with the cycles of the moon – the dark moon being the beginning of the month and also with the year – the beginning of winter being the beginning of the year.

Although Paganism almost completely died out in most of Europe, the festivals and traditions of Paganism survived, not just into the Christian period, but into the modern era. To a large extent the strongest cultural survivals of Samhain/Halloween can be found in Ireland, Britain and Brittany, where both the languages and cultural traditions hung on despite very deliberate and harsh attempts to eliminate them.

All of the traditions that we find surrounding Halloween are Pagan in origin, somewhat mutated in some cases, but clearly derived from Pagan belief and folk practice in every case. In essence, Samhain is a festival of the dead and traditions regarding the rites of passage for deaths and regard for ancestors are something that is not easily eliminated in any culture. The various Christian churches, outlawed and prohibited customs such as lighting bonfires, leaving offerings for the ancestors, parades, games, divination etc but to a huge extent the populace ignored these dictates, especially in more rural areas.

In the end, the Church was forced to give up and appropriate much of the traditions of Samhain under the banner of All Hallows Eve and All Souls Day, but this was not particularly successful in modifying the behaviour of ostensibly Christian parishoners - who still believed in fairies, the returning of spirits of the ancestors, the Celtic otherworld and the art of divination at such an auspicious time. Although one can detect some of these traditions begin to die out from after World War I and World War II particularly, the knowledge of them is well recorded, leading to somewhat of a revival, particularly in the 21st century.

The Mound of the Hostages at the Hill of Tara

To a large extent the traditions of Samhain were exported to North America, Australia and New Zealand by Irish, Scottish, Welsh, English and Breton emigrants. These traditions carried on fairly undisturbed into modern American culture, and in many cases becoming fused with Central/South American ancestral/Day of the Dead traditions that are very similar in nature, as well as those exported from Africa via the slave trade.

What is clear is that the native spirituality of western Europe, at least with regard to the Festival of the Dead, has a lot in common with the native traditions of Central/South America (such as Peru, Brazil and Mexico) and the native traditions of western Africa. In modern Halloween traditions one can find symbolism and practices from syncretic beliefs of Santería, Candomblé,Voodoo, Hoodoo, Vodun and Aztec religion sitting alongside Celtic symbolism and practices - much of which has been re-imported to not only Europe, but many countries around the world.

One could say that the pre-Christian Festival of the Dead is a tradition that just refuses to die, despite extremely vigorous attempts to stamp it out of existence. Not only in Ireland, Britain and Brittany were these belief and practices suppressed but through out Africa and the New World, where they either already existed or were brought over along with the slaves who survived the horrendous journey.

Today the celebration of Halloween (and Samhain) is accepted as a part of the yearly calendar, a bit of harmless fun – but its roots lie in deeply spiritual, serious practices and beliefs that come from traditions that are much older than Christianity. So, Halloween is actually a lot older than we might at first think and its tradtions have survived a long history of persecution and oppression. In Ireland the ancient bonfires can be traced back to Tlachtga, both a Goddess and a place (in County Meath) where the Druids lit sacred fires, at least as long as 3500 years before today. 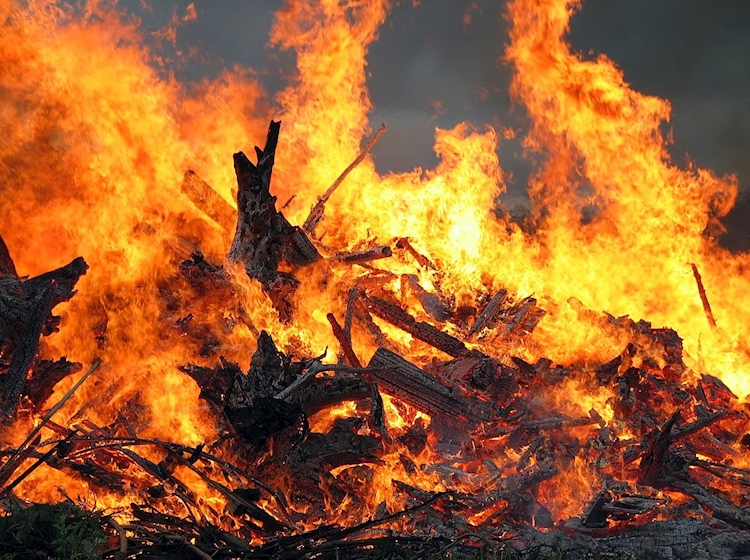 Halloween/Samhain is a tradition that has defied the best attempts to destroy it, and may well remain with us for thousands of years yet to come.

The Devil Comes to Dartmoor

The Haunting of Willington Mill