What was Captain Cook looking for when he crossed the Antarctic Circle in 1773?

‘At about a ¼ past 11 o’Clock we cross’d the Antarctic Circle…and are undoubtedly the first and only Ship that ever cross’d that line.’ — Captain Cook, 17 January 1773.

Human beings are very curious; we want to know what lies over the horizon. We are also very competitive; not only do we want to go ‘where no man has ever gone before’, but we honour the first fastest recorded person so to do. We are also commemorative, so it is only appropriate that we celebrate 17 January as the anniversary of Captain James Cook taking his ship and crew across the Antarctic Circle. Cook’s claim in the log that this was ‘undoubtedly the first and only Ship that ever cross’d that line’ is probably technically correct in that if people had sailed across this line before, which is possible, they would probably have done so in a boat rather than a ship.

This was in the second of Cook’s three voyages of discovery. Cook was a brilliant navigator and cartographer, and on this voyage he was helped by modern technology. Much was achieved, but the aim was not simply to find new places, new people and new plants, it was primarily a matter of trade. The Royal Society and the government were both keen that the existence or non-existence of Terra Australis (a large fertile landmass south of Australia) should be finally settled. Cook arrived at Spithead in a rather battered Resolution, on 30 July 1775, after more than three years away. He had shown that there was no Terra Australis flowing with milk and honey south of Australia; if there was a polar land mass, and Cook thought there probably was, it was a terrain of barren ice and no-one would want to go there, as there could be no trade and no profit. 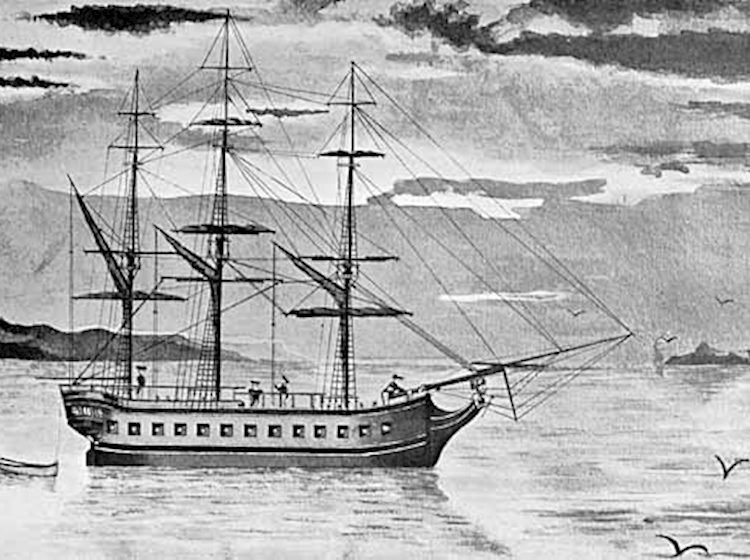 Science was seen as the means of promoting trade which in turn would bring wealth which would benefit the whole country. The logic was simple: the more territory Britain controlled which contained valuable raw materials the bigger the trade and the wealthier the country would become, especially as the same controlled territory would be a secure market for British manufactured goods. Thus a nation’s prosperity depended upon defeating trade rivals; seizing control of profitable raw materials and markets; securing trade routes; encouraging a large merchant marine; financing a strong navy; building state of the art ships; developing new technologies to improve effective navigation and discovery; and being constantly looking for new and commercial natural products. As the 18th century progressed Britain expanded its trade by doing most of the above, and eventually (but neither steadily nor easily) doing it better that their main trade rivals Holland, France and Spain.