A timeline of the Battle of Verdun, which lasted for 303 days between February and December 1916 and became the longest and one of the most costly battles in human history.

4.45 a.m. – Bombardment ceases and the German infantry assault begins. The Bois d’Haumont and the Bois d’Herebois fall to the Germans, but Driant’s Chasseurs just manage to hold on to the Bois des Caures

22 February – The Germans renew their artillery bombardment at first light, then use a greater weight of forces to overwhelm the defence of the Bois des Caures. The hill is taken and Driant is killed

24 February – The German advance takes several other key points, pushing the 51st Division off the Bois des Fosses and capturing Ornes village on the Meuse. The French second line of defences collapses 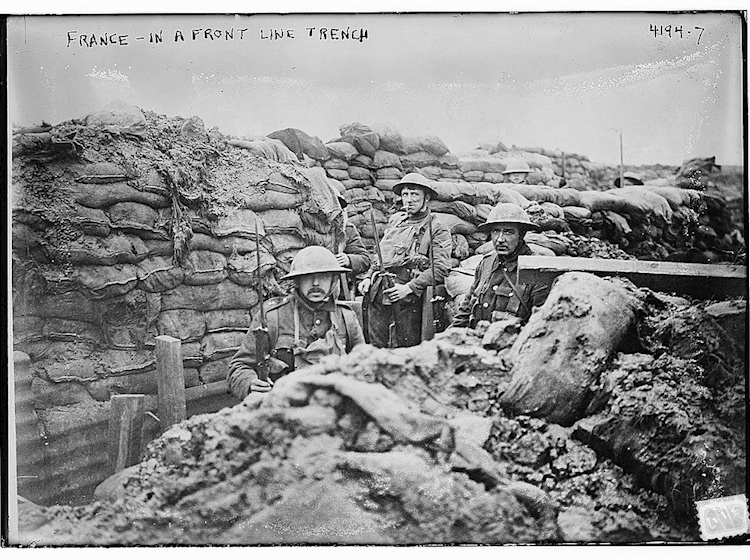 Servicemen in a front line trench in France (Library of Congress)

9 April – German forces launch a major attack on both sides of the Meuse. The onslaught on the west bank puts German troops on the slopes of Le Mort-Homme, but the offensive on the east bank makes little headway

29 May–2 June – Fighting is intense around Hill 304, Le Mort-Homme and Thiaumont

3–8 June – Fort Vaux is surrounded by the Germans, and after a five-day battle the French are forced to surrender this key position

Image from the New York Times newspaper, reporting on the Battle of Verdun

28 August – Falkenhayn resigns, and is replaced by Paul von Hindenburg

2 September – Hindenburg orders that all offensive operations at Verdun cease

15 December – Another French offensive at Verdun pushes German forces back almost to their February 1916 start positions at Bois de Chaume. The Germans have by now lost nearly all their territorial gains at Verdun

The German defeats at Verdun in 1916 were not the end of fighting in the Verdun sector. The war still had two more years of agony ahead of it, and Verdun was not to be spared further suffering. The sector remained relatively quiet for the period January–August 1917. Then on 20 August 1917, French forces launched another major offensive, applying eight divisions and recapturing almost all of the features that remained in German hands from February 1916, including Regnéville, Samogeux and Hill 304. The final act came on 26 September 1918, this time with the energetic support of the US Army (the United States had declared war on Germany on 6 April 1917). The battle ran on until the very end of the war, and saw the French forces take the critical supply hub of Sedan on 6 November, five days before the Armistice. With the conclusion of hostilities on 11 November, the Verdun region could finally enjoy some measure of peace, and begin the long road to restoration.