It’s no secret that the story of Titanic is interwoven with legends, myths and misconceptions due to its complexity and worldwide popularity. However, this ubiquitous mythology has also penetrated even into a relatively new branch of Titanic science, namely, into the history of the exploration of her wreck that only began (officially) in 1985.

This year (2019), the eagerly anticipated Titanic Survey Expedition was sadly postponed again, (while the Triton Submarines’ DSV Limiting Factor succeeded in making five dives in early August) so it makes sense to look back at the 25 years of previous expeditions and to try and give a scientific assessment of some of the most widespread and long-standing myths and often-repeated untruths of Titanic’s underwater history.

Dr Robert D. Ballard was the sole discoverer of the wreck of Titanic

No. It was joint French–American scientific team that first revealed the wreck of Titanic to the world in early September 1985. There is some reason to believe that the US science team's leader, Robert Ballard, might probably have known something (about a large unidentified shipwreck or two shipwrecks lying next to each other in certain coordinates) prior to going on an expedition, but French input and participation were significant nonetheless. In fact, the French team had a very good chance to discover the wreck when they came within a few hundred meters of it with their newly developed deep-search sonar SAR in July. Ballard himself admitted that it was their joint discovery with the French. What Ballard undoubtedly did, even if he was working with an advantage from the US Navy classified data, was conclusively locate, identify and document the wreck of Titanic, which no one had really done before, and that was a major achievement in any case.

It’s Olympic, not Titanic down there

False. Notwithstanding the recent passing of Robin Gardiner, the most ardent ideologist and promoter of the so-called ‘switch theory’, the latter still pops up from time to time. However, the mere idea of replacing one sistership to another was thoroughly debunked by the most knowledgeable researchers and has lost its scientific credibility since then. There are numerous reasons and facts that make the Titanic/Olympic switch nonsensical and absolutely impracticable. First of all, despite being the ships of one class built from the same set of drawings, in actual fact they weren't twin sisters and had thousands of large and small differences between each other, both inside and outside. The external insurance covered no more than 2/3 of the building cost of Titanic. The wreck itself and some of its recovered artefacts represent the most definitive material evidence: the starboard propeller blade (filmed close up in 1991), the helm indicator from the aft bridge, two six-point wrenches for piston-rods and other objects and mechanical details are all engraved with Titanic’s yard number, 401. The whole set of these arguments allows us to identify the wreck as Titanic with complete confidence.

Titanic's starboard propeller with the number 401 stenciled on its upper blade. July 1991. (© The Stephen Low Company)

Most probably no. The top-down break scenario gained popularity in the late 1990s, although the late Roy Mengot came up with the opposite theory yet in 1996 postulating that the vessel broke ‘from the bottom up, mainly’ (see http://wormstedt.com/RoyMengot/TitanicWreck/BREAKUP/Breakup.html). The most recent and accurate computer modeling based on the latest calculations performed in 2011–2012 by naval architects of the US Naval Academy and the US Coast Guard (Dr Jeffrey Stettler and his colleague Brian Thomas), sponsored by James Cameron, has basically confirmed and elaborated the bottom-up break theory showing that most probably it was the ship's keel that had failed first (see Stettler and Thomas' joint paper “Flooding and Structural Forensic Analysis of the Sinking of the RMS Titanic” in Ships and Offshore Structures, Vol. 8, Issue 3–4, 2013). There is a set of indirect evidence to suggest that this was indeed what had happened. In either event, one should always bear in mind that, technically speaking, the lightweight upper superstructure – that is, everything above the level of B deck – is not an integral part of the ship's hull. Therefore, any possible breakages in its structure (there are some witness reports of cracks or at least cracking sounds at the upper to the middle deck levels prior to the Final plunge) could not have affected the overall integrity of the main hull and its backbone – the keel. 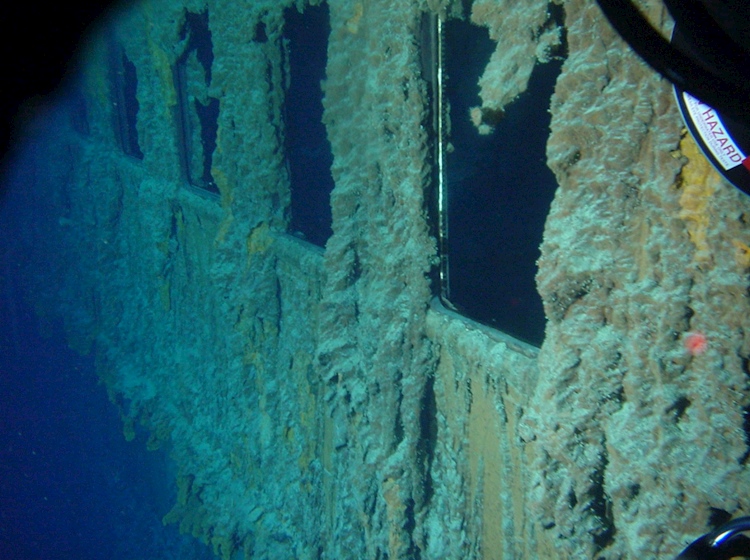 The wreck – or the bow section at least – can be raised

Totally infeasible, even leaving aside the fact that the wreck is now a subject to the UNESCO 2001 Convention on the Protection of the Underwater Cultural Heritage (which is not ratified by many maritime countries though). What looks good in a 1980 science fiction/adventure film Raise the Titanic and also on paper, is impossible in reality primarily because of physical condition of the wreck. The bow section is in better shape comparing to the stern, but not fundamentally better – it’s far from being pristine. One of the problems is that it is cracked in at least two places. Another and more serious issue is that its entire forward end is buried deep into the mud, almost up to the anchor hawsepipes (i.e. about 45 ft). This mud is not a soft slime or gentle sand; it’s a very dense bottom sediment comparable to crude clay. The forward part of the bow is literally sunk in that clay stratum. Any attempt to raise the bow section will inevitably result in its collapse into pieces long before reaching the surface.

The debris field was plundered

Some people complain that Titanic’s debris field has become very poor and scanty after a series of salvage operations that picked up more than 5 thousand artefacts. They claim it is particularly noticeable in the area between the bow and the stern sections, where allegedly almost nothing is left at the present time. ‘Nothing could be farther from the truth,’ Ken Marschall objected in 2001. The full sonar map and segmentation of the debris fields/artefact scatter accomplished by the 2010 expedition revealed that most of the artefacts were always – since the early morning of 15 April 1912 – concentrated primarily to the south and the east of the stern, within an area of little less than a square mile and with very little material dispersed between the two main portions of the hull. Only ‘a few artefacts were found between the bow and the stern’, confirmed Paul-Henri Nargeolet in personal correspondence with this author, ‘and some on the west of the bow section. There are still thousands of artefacts in the debris field.’ Given the amount of objects still remaining both inside and outside the vessel, it seems unfair to accuse RMS Titanic, Inc. of ‘plundering’ the wreck site.

The wreck will disappear within approximately a 30-year term

This is most likely not true. In 30 years, the wreck will of course look vastly different from what we have today ; the superstructure will eventually collapse at some point. The natural processes of biodegradation and deterioration cannot be stopped or facilitated. According to calculations, Titanic loses between 0.13 and 0.20 tons of iron daily, even at this very moment. But we can be pretty confident that the wreck won’t turn into dust or ‘a rust stain on the bottom’ in any foreseeable future. It is safe to say, following Dr Roy Cullimore, that such parts of the vessel as, for example, her lateral propellers (whose blades were made from manganese bronze) or the prow will most probably still be present and clearly recognisable in 100 to 200 years, or maybe even later, because of the mechanical strength designed into them.