On 20 November 1992, Windsor Castle, the largest inhabited castle in Europe and one of the official residences of Queen Elizabeth II, suffered extensive damage in a huge fire.

The fire began in the Queen’s private chapel at around 11:30 a.m. and the blaze quickly spread to the neighbouring Brunswick Tower, St George’s Hall banqueting space and the private apartments in the eastern wing of the building. The main fire burned for almost 12 hours, causing severe damage and making headline news across the world.

The fire began in the Queen’s Private Chapel where it is believed a 1,000-watt spotlight being used by renovators overheated and ignited a curtain pressed up against it.

Due to a lack of firebreaks and fire-stopping materials in cavities and roof voids, the blaze spread quickly into Brunswick Tower, St George’s Hall, and into the private apartments in the eastern wing of the building.

Castle staff and soldiers, helped by Prince Andrew, Duke of York who had been working in the castle at the time the fire broke out, formed a human chain in order to try and rescue precious furniture, artworks and antiquities.

Fortunately, because rewiring works were being carried out in the areas of the building most affected by the blaze, many valuable paintings and pieces of furniture had already been removed.

At the time, Windsor Castle had its own fire department of 20 men, six of whom were full-time. Based in stables two miles south of the castle, they arrived on the scene after only a few minutes, equipped with a Land Rover and pump tender.

At least 225 firemen fought the blaze using 39 appliances; according to Fire Brigade figures, Greater London had only suffered one other fire which required more than 30 appliances to be present since 1973. Fire services from London, Buckinghamshire, Surrey and Oxfordshire, as well as from Berkshire attended.

To stop the fire spreading, tradesmen were asked to construct firebreaks in order to block off the majority of the castle.  These were put in place at around 1.30 p.m. By this point the firefighters had started to bring the fire under control, though the roof of the State Apartments had begun to collapse.

At 7:00 p.m. the roof of St George’s Hall collapsed, but an hour later the fire was finally under control. The main fire continued to burn for another three hours and secondary fires remained until 2:30 a.m. before they were totally extinguished.

In the days immediately following the fire 60 firemen with eight appliances remained on duty. 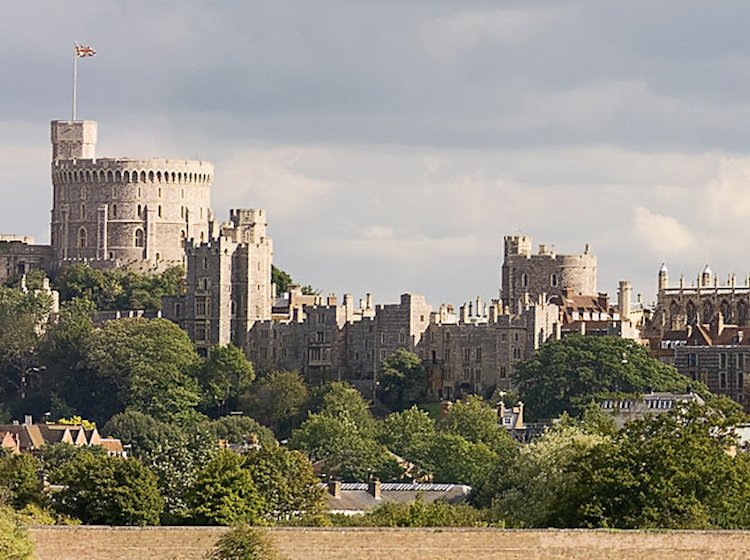 1.5 million gallons (6,750 tonnes) of water from the mains water supply, a reservoir-fed hydrant, a swimming pool, a pond, and the nearby River Thames were used to fight the fire.

The Queen was informed about the fire by a phone call from Prince Andrew, who had been on site doing research for his course at Staff College, Camberley when the fire broke out. She arrived at 15:00 and stayed at the castle for an hour.

Prince Andrew briefed the press, telling reporters that Her Majesty was devastated, and the Prince of Wales visited the castle in the evening. The Queen returned again the following morning to inspect the damage.

In addition to the firemen directly involved in the firefight, 125 castle staff, 125 contractors, 100 military personnel and 20 Crown Estate staff were involved in the salvage operation.

300 clocks, a collection of miniatures, thousands of valuable books and historic manuscripts, and old Master drawings from the Royal Library were saved, as well as  a 150-foot (46 m) long table and a 120-foot (37 m) long carpet from the Waterloo Chamber.

Items from the Royal Collection lost included the Sir William Beechey equestrian portrait George III and the Prince of Wales Reviewing Troops, which at 13 feet (4 m) by 16 feet (5 m) was too large to remove; an 18-foot (5.5 m) long 1820s sideboard by Morel and Seddon; several items of porcelain; several chandeliers; the Willis organ; and the 1851 Great Exhibition Axminster carpet was partly burnt.

A copy of George III and the Prince of Wales Reviewing Troops, a painting destroyed in the fire

Nine principal state rooms were destroyed and at least 100 more were severely damaged, accounting for one fifth of the castle (9,000 square metres)

In a speech at the Guildhall on 24 November the Queen described 1992 as an annus horribilis, a Latin phrase meaning ‘horrible year’; 1992 had also seen her daughter Anne divorce and her sons Charles and Andrew announce the end of their marriages following intense media speculation.

Within three days tourists had been allowed back into the castle grounds and the Queen was back in residence a fortnight later.

Occupied royal palaces like Windsor Castle are too valuable to insure, and items in the Royal Collection are not insured against loss, so a debate followed as to who should foot the bill for repairs to the castle. Technically it is owned by the state, not the monarch, and some MPs and parts of the media called for the Queen to pay for the repairs herself. An independent trust for private donations towards the cost of the restoration was announced on 16 February 1993 by the Queen’s bank, Coutts.

In response, the Queen agreed to open up parts of Buckingham Palace to the public for the first time, with money raised from the £8 entry charge going towards Windsor’s restoration. This covered around 70% of the repair bill, while the Queen donated £2 million of her personal wealth to the refurbishment. She also agreed to start paying income tax from 1993 onwards, making her the first British monarch to do so since the 1930s.

It was initially feared that it would cost £60 million to restore the castle and that drying out could take up to 10 years. However the final cost was closer to £36.5 million (equivalent to £68 million as of 2016).

Architectural firm Donald Insall Associates was appointed by the Royal Household to take overall charge of the restoration, with Sidell Gibson dealing with the reconstruction of St George’s Hall and the design of the new Lantern Lobby and Private Chapel. Over half the damaged and destroyed rooms, including the State and Octagon dining rooms, were to be restored as original. There were new designs for the St George’s Hall ceiling, East Screen, the Queen’s Private Chapel, Stuart and Holbein Rooms.

New designs for St George’s Hall and the Queen’s Private Chapel were approved by the Queen on 24 January 1995. Designed by architect Giles Downes, the new roof for St George’s Hall is an example of a hammer-beam ceiling. Downes’s new roof is the largest green-oak structure built since the Middle Ages and is decorated with brightly coloured shields celebrating the heraldic element of the Order of the Garter. 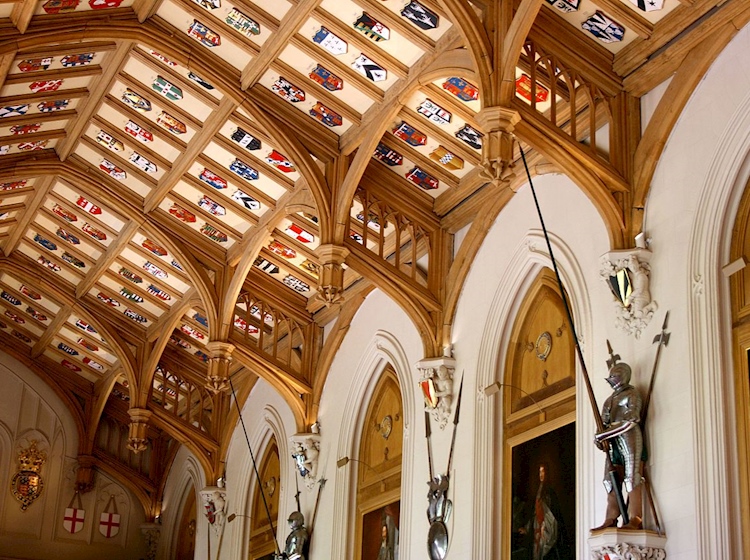 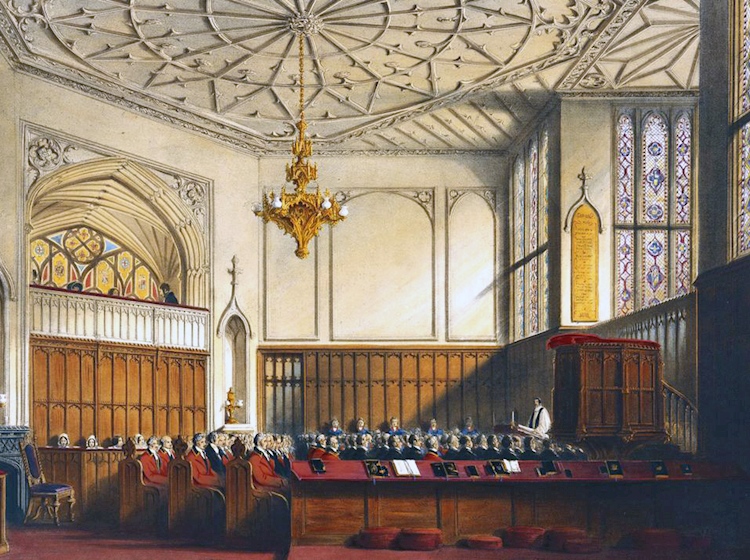 A drawing of the Private Chapel by Joseph Nash, 1848

After five years, the restoration works were finally completed in November 1997.