The Victorian dinner inside a dinosaur

Whatever you have planned this New Year’s Eve, it almost certainly pales in comparison to what Benjamin Waterhouse Hawkins and his guests were doing on 31 December 1853.

In a ruse designed to grab the attention of press and public, Hawkins, creator of the world’s first dinosaur sculptures for the new Crystal Palace Park, invited 21 leading academics and notable persons of the day to a New Year’s Eve dinner party inside the model of an Iguanodon to mark the launch of the models. The Iguanodon was selected because it was the largest of the exhibits that had been commissioned.

The previous year, sculptor and natural history artist, Benjamin Waterhouse Hawkins had been asked to create a series of sculptures for the area surrounding the Crystal Palace in London, following its relocation from Hyde Park to Sydenham Hill.

The Great Exhibition had taken place in Hyde Park in 1851 and an enormous steel and glass building dubbed the ‘Crystal Palace’ had been built to house the exhibits. The exhibition was only planned to last for six months, but there was a public outcry for it remain and so authorities decided to remove it from the park and erect it on a new site.

Following the closure of the Great Exhibition, Joseph Paxton’s Crystal Palace was moved to Penge Place on Sydenham Hill in South London by a newly formed Crystal Palace Company. The grounds surrounding the new location were then extensively renovated and turned into a public park with ornamental gardens, man-made lakes and statues. 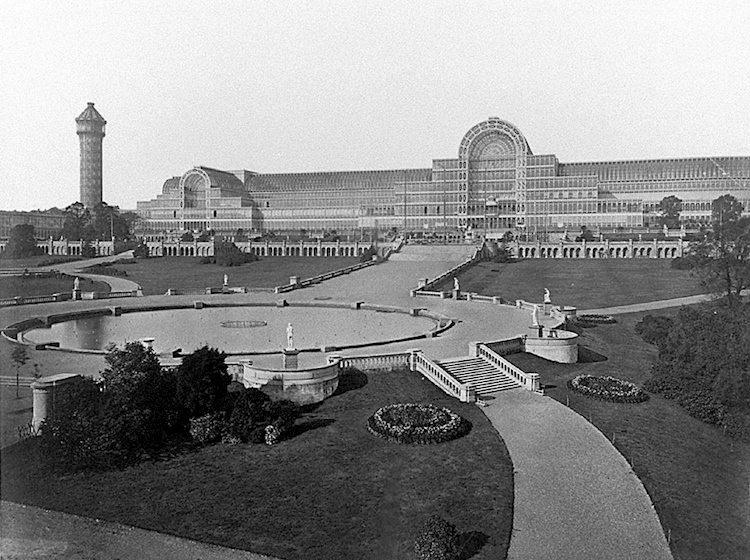 As part of the revolutionary renovation Benjamin Waterhouse Hawkins was approached and commissioned to build the first-ever three-dimensional life-sized models of extinct animals, which would feature as part of the ‘theme park’. Having originally planned to only re-create prehistoric mammals (such as plesiosaurs and ichthyosaurs like those discovered by Mary Anning in Lyme Regis and a South American Megatherium, such as the fossil brought back to Britain by Charles Darwin following his HMS Beagle voyage), this was extended to include dinosaurs.

Etching of Benjamin Waterhouse Hawkins' studio in Sydenham, where he made the Crystal Palace dinosaur.

Working under the guidance of celebrity palaeontologist Richard Owen (the man who coined the phrase ‘dinosaur’), Hawkins constructed dinosaurs from the Paleozoic, Mesozoic and Cenozoic eras, to be displayed on three islands which acted as a rough timeline. The models would also be given more realism by making the water level in the lake rise and fall and being set against a backdrop of the kinds of rocks in which the skeletons had originally been found. Although some of the statues are wildly inaccurate compared with modern interpretations, they represented the latest scientific knowledge at the time and pre-date publication of Darwin’s ‘On the Origin of Species’ (1859).

Dinner in the Iguanodon

The models were highly anticipated by the public, so playing to the hype and to further publicise the project, Hawkins suggested holding a dinner party inside one of the dinosaurs in order to maximise press coverage.

He invited 21 high-profile distinguished guests (all men), including scientists, Crystal Palace investors and newspaper editors, to enjoy an eight-course feast on New Year’s Eve 1853 inside the mould of the Iguanodon model. 11 of the guests sat inside the cavity of the dinosaur and the remainder sat an adjacent table. Because the model stood so tall, a stage was required for waiters and guests to reach the inside chamber.

As the ‘brains’ of the project, Richard Owen was sat at the head of the table within the skull of the Iguanodon. Hawkins was in the centre, as later he delivered a short presentation about the sculptures. According to newspaper reports the event became quite rowdy and boisterous, going on past midnight with guests staying late enough to ring in the new year.

Preserved copies of the menu card show that the food served that evening was an elaborate affair consisting of a variety of soups, fish, meat, sweets and desserts and several types of wine.

Where is the Iguanodon now?

When the park opened to the public in 1854 Hawkins benefited greatly from the public reaction, which allowed for the sale of small versions of the models for educational use. However, the building of the models was costly and the Crystal Palace Company cut his funding in 1855; several planned models were never made and those only half finished were scrapped.

With scientific progress, and greater understanding of palaeontology the reputation of the models declined and both the models and the park fell into disrepair as the years went by. In 1936 a catastrophic fire destroyed the Crystal Palace and the models became obscured by overgrown foliage.

In 1952 a full restoration was carried out by Victor H. C. Martin, where the models on the third island were moved to less well-protected locations in the park, unfortunately exposing them to greater wear and tear. In 1973 the models were given Grade II listed status and in 2002 the displays were totally renovated and restored. They were upgraded to Grade I listed status in 2007 and today 29 statues remain, including the 30-tonne Iguanodon model.