The tradition of Pickle Night

The season of formal Trafalgar Night dinners, celebrated by navies throughout the Commonwealth, starts on Trafalgar Day, October 21, and ends in early November with Pickle Night, which celebrates the arrival in London of Lieutenant John Lapenotiere on HMS Pickle, carrying news of victory over the French and Spanish fleet at Trafalgar and the death of Lord Nelson.

HMS Pickle was one of the superyachts of her day. Carefully maintained by the Admiralty, her officers and crew were handpicked, and her fore-and-aft rig and her copper-bottom - which was cleaned and repaired at least once a year - gave her a speed advantage over other ships.

Pickle enjoyed her ‘fifteen minutes of fame’ after she raced home from the Battle of Trafalgar in October 1805 with Admiral Sir Cuthbert Collingwood’s immortal despatch to their Lordships of the Admiralty, which started with the words that ‘the ever to be lamented death of Vice Admiral Lord Viscount Nelson, who, in the late conflict with the enemy, fell in the hour of victory, leaves to me the duty of informing my Lord Commissioners of the Admiralty of a victory … I have only to lament in common with the British Navy, and the British Nation, in the fall of the Commander in Chief, the loss of a Hero, whose name will be immortal, and his memory ever dear to his country’.

To bring this news, Pickle’s commanding officer Lieutenant John Lapenotiere, the great-grandson of a Huguenot immigrant, had raced under sail over 1,000 miles of ocean and ridden hard in a post-chaise for nearly 300 miles across a wintery landscape to arrive in a foggy London at one o’clock on the morning of November 6. Bursting into the Admiralty Board room, Lapenotiere found William Marsden, the Secretary of the Admiralty, holding a candle aloft and about to retire to bed. Lapenotiere, who had had nearly two weeks to think about what he would say as he handed over Collingwood’s despatch, paraphrased his admiral’s words, crying out:

‘Sir, we have won a great victory, but we have lost Lord Nelson!’ 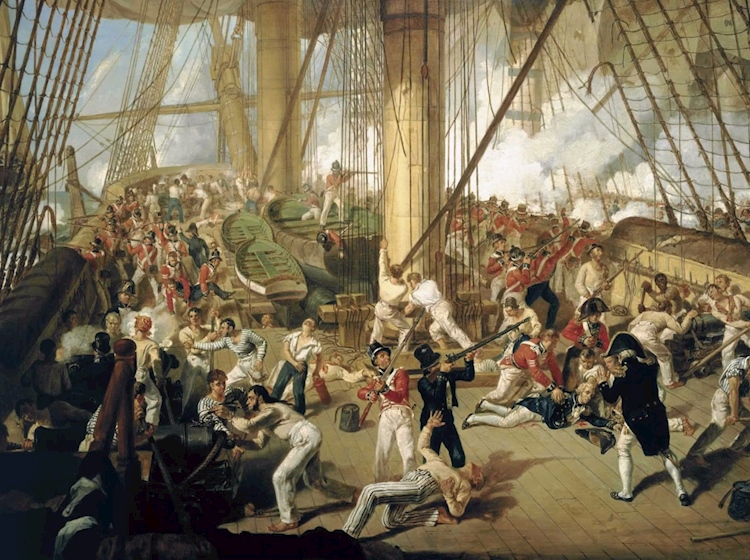 Nelson is shot on the quarterdeck, painted by Denis Dighton, c. 1825 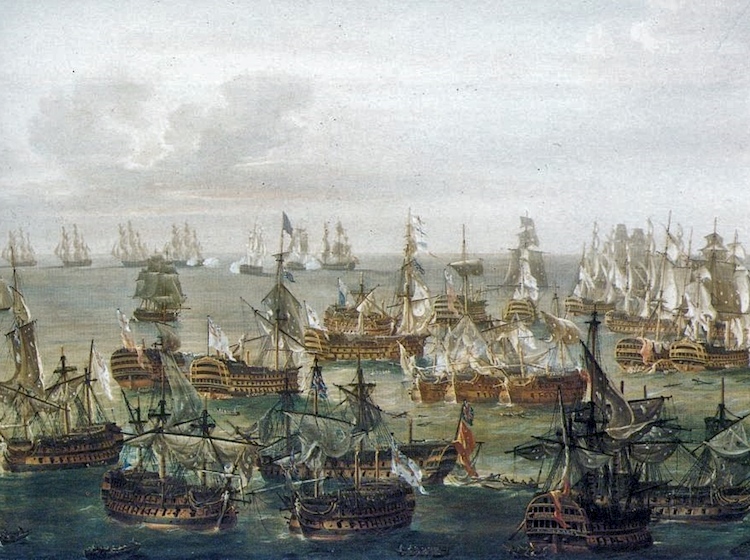 Painter Nicholas Pocock's depiction of the Battle of Trafalgar

More from this author