The Slavery Abolition Act of 1833

On 28 August 1833, the Slavery Abolition Act was given Royal Assent and came into force on the following 1 August 1834. Its full bill title was ‘An Act for the Abolition of Slavery throughout the British Colonies; for promoting the Industry of the manumitted Slaves; and for compensating the Persons hitherto entitled to the Services of such Slaves’.

There were lots of different factors that led to the 1833 Abolition Act. Slave revolts, home grown abolition movements, religious arguments, government policies and the economy. By the time of the act coming into force in 1833/4, the economy wasn’t as reliant on the triangular trade as it had been during its heyday in the early 1700’s.

Prior to the act of 1833, the abolition movement began to gain momentum a number of years earlier in 1772 with the Mansfield case. This case was pivotal as it reached the verdict that slavery was unsupported in English law. Any slave that set foot in England or Scotland was legally free. People soon began to question that if everyone was free in England, why were they in bondage in the colonies? By 1787 the committee for the abolishment of the slave trade was established by a mixture of Quakers and Evangelical Protestants. Their numbers grew and eventually they had gained around 40 seats in parliament by allying themselves with key people such as William Wilberforce. They gained a victory in 1807 with the bill of the abolition of the slave trade being passed. However, this bill abolished the trade in slaves but not slavery itself. 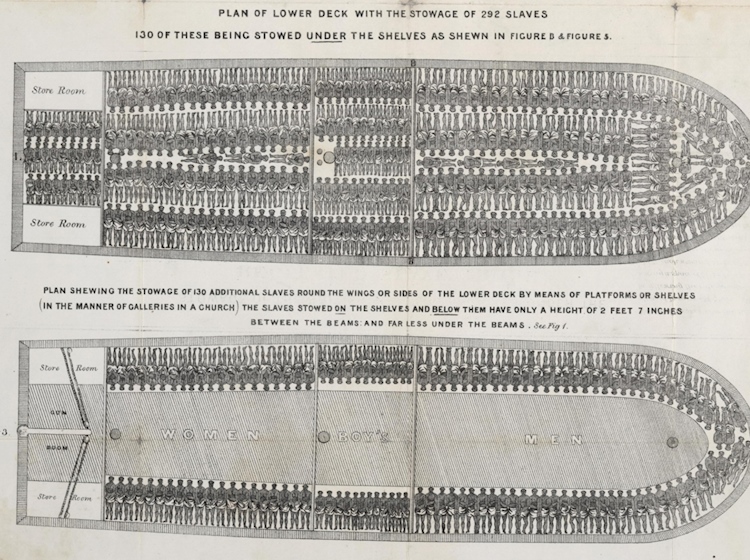 With the 1807 bill, the Royal Navy’s newly formed ‘West Africa Squadron’ could seize and fine any captain £100 for each and every slave found on board his ship. The tragic consequence of these patrols meant that a number actually murdered slaves by throwing them overboard into the sea rather than risk a substantial fine. However, it soon became apparent that the trade could not be effectively stopped and that it even encouraged smuggling rings leading to slaves increasing in value.

The trade in slaves was also becoming less cost effective. The triangular trade usually involved two trips for each enterprise – one slave ship and one cargo ship. The slave ship would be sent from Britain to the markets on the African coast, and be docked there for some time whilst the crew waited for enough slaves to be brought to the market for purchase before eventually setting sail to the Caribbean. Secondary ships would then have to be sent directly from Britain to the Caribbean to pick up the produce. This process could sometimes take up to 2 years. Slave ships and cargo ships also had to be equipped differently for their load. A slave ship would be infused with weeks and months of human excrement, vomit, blood as well as food waste. No trader would then load perishable and valuable goods onto the same vessels. In addition, plantation owners encouraged ‘breeding programs’ so slaves would reproduce, effectively gaining more slaves at no extra cost rather than purchase at market.

In 1823 the ‘Anti-Slavery Society’ was formed and included notable luminaries such as Wilberforce and Henry Brougham. Its goal was not only the continued suppression of the trade but the end to slavery itself – but gradually and not immediately. Wilberforce argued that ‘It would be wrong to emancipate (the slaves). To grant freedom to them immediately would be to insure not only their masters' ruin, but their own. They must (first) be trained and educated for freedom.’ However, there were also numerous voices at the same time calling for immediate and full emancipation.

In 1831 there was a slave revolt in Jamaica, also known as ‘The Baptists War’. In what was supposed to initially be a peaceful general strike, it soon escalated after Baptist preachers (who had been following the abolition movement in the UK) received news that no emancipation had been granted to them by the British King. Violence soon erupted with crops and plantations being burnt to the ground. The rebellion was squashed with force by the slave owning establishment and resulted in a number of deaths and later on numerous executions. The damage to the islands economy and the plantations finances, plus two inquiries into the revolt added to the case for emancipation at home and abroad.

By July 1833, the act was read for the third time in parliament and a few days before the death of Wilberforce. The same year, parliament received several more petitions calling for the end of slavery. Finally, the act was passed and received Royal assent on 1 August.

The act had two major parts to it – the emancipation of all slaves throughout the British colonial empire except those held by the East India Company, the island of Ceylon (modern day Sri Lanka) and Saint Helena) and compensating slave owners for the loss of the slaves. Interestingly, the government at the time took out a loan to pay for the slave owner’s compensation. The loan was at the time a large proportion of (40%) of total government expenditure and was only paid off in full in 2015 (mainly due to the gilt system of debt rather than the amount owed). The slaves themselves received no such compensation and were made to work as apprentices and given board and lodging for another 6 years. Children under 6 were immediately emancipated. Full emancipation for all was made legal on 1 August 1838.

In 1998, the Slavery Abolition Act of 1833 was repealed. Slavery is still illegal and is incorporated into The Human Rights Act 1998 and The European Convention on Human Rights which prohibits the holding of any person as a slave.