On 10 May 1941 Deputy Führer of the Third Reich, Rudolf Hess, provoked widespread intrigue and speculation when he embarked on an astonishing flight to Scotland. In one of the most bizarre episodes of World War II, Hitler’s deputy flew solo for almost 1,000 miles from Bavaria in a Messerschmitt Bf110 before parachuting into a field near Eaglesham in Scotland, apparently on a one-man peace mission in the days leading up to Germany’s invasion of Russia.

Captured by the British, the prominent Nazi was held prisoner for the rest of the war, before being convicted of war crimes at the Nuremberg Trials in 1946. He died in 1987, aged 93, in Spandau Prison. Shrouded in mystery, the story of Rudolf Hess’s daring flight has spawned endless tales, notions and myths ever since. Here are 10 of these conspiracy theories:

1. The Duke of Hamilton was associated with Hess and implicated in his flight

Upon being captured in Scotland, Hess gave a false name and said he had an important message for the Douglas Douglas-Hamilton, the Duke of Hamilton, a fellow aviator whom he had never met. Hess mistakenly believed that the Duke was part of an anti-government faction and prominent in opposition to war with Germany.

When considering his plans for secret peace talks with the British, Hess had sought the advice of his friend Albrecht Haushofer and Haushofer had suggested the unsuspecting Duke as suitable contact in the enemy country. Douglas-Hamilton had met Haushofer when he was in Germany as part of a UK parliamentary group observing the 1936 summer Olympics and the two had stayed in touch, with the Duke offering hospitality to Haushofer during his pre-war visits to London. This Haushofer link has caused some to speculate that Douglas-Hamilton and/or MI5 were actively trying to negotiate peace terms with Germany or that the Duke approved of Hitler’s Nazi regime.

There is however, no evidence to suggest that Duke of Hamilton had sympathy with the Nazi cause, or that he was part of an anti-government faction as Hess believed. He belonged to the Conservative party, was a friend of Winston Churchill and served his country in the RAF. Douglas-Hamilton successfully brought a libel action against two Communists in 1942 who asserted that he was friends with Hess.

The wreckage of Hess's Messerschmitt Bf110 after crashing at Bonnyton Moor, Scotland
Hess (right) with his geopolitics professor and father of Albrecht Haushofer, Karl Haushofer (left), circa 1920
Rudolf Hess in 1933

The Russians first propagated this belief, after Stalin had not believed an urgent warning from the British in April 1941 that Hitler was about to attack their country. When the assault began in June, Stalin was convinced that Britain was in league with Germany and that Hess’s flight had been engineered by British intelligence with the Duke of Hamilton as a go-between. Even after Britain tried its best to bring war supplies to Russia with their Arctic convoys, the suspicion persisted; the Russians could not fathom why Britain did not prosecute Hess as a war criminal but kept him in comfortable quarters as a prisoner of war to await a post-war trial.

By 1991 the KGB claimed that the Duke of Hamilton was not directly involved but that fake letters purporting to be from him were sent to Hess by MI6, with the intention of luring him to Britain. This information was said to have come from Kim Philby, a British agent and one of the ‘Cambridge Five’ secretly working for Russian intelligence. In documents released by the Public Record Office, Hess makes no mention of a lure and the Duke of Hamilton is unaware of any faked letters having been sent under his name.

3. Hess made the flight with Hitler’s knowledge and was acting as his emissary

If Hitler was aware of his deputy’s activities then he took no steps to stop them. German authorities must have been aware of Hess’s general activities at Augsburg – to keep his flying practice secret from ground staff, mechanics and other pilots would have been difficult – but Hess had been a keen aviator since the First World War.

Hess himself is adamant that Hitler knew nothing of his intention; in his statements to the British he says that he flew entirely on his own initiative. He also wrote to his adjutant, Karlheinz Pintsch thanking him for remaining silent and there is evidence from Albert Speer, who witnessed Hitler’s uncontrollable rage upon hearing about Hess’s flight. There are also entries in Josef Goebbel’s diaries to the effect that Hitler said Hess deserved to be shot for treason. A 1946 investigation carried out by MI5 in Germany, and made public in 1999, concluded that Hess had flown on his own initiative and without orders from Hitler. It confirmed that Hess had left a letter for Hitler stating his intention to obtain a last-minute understanding with Britain before the German offensive on the USSR in June 1941. 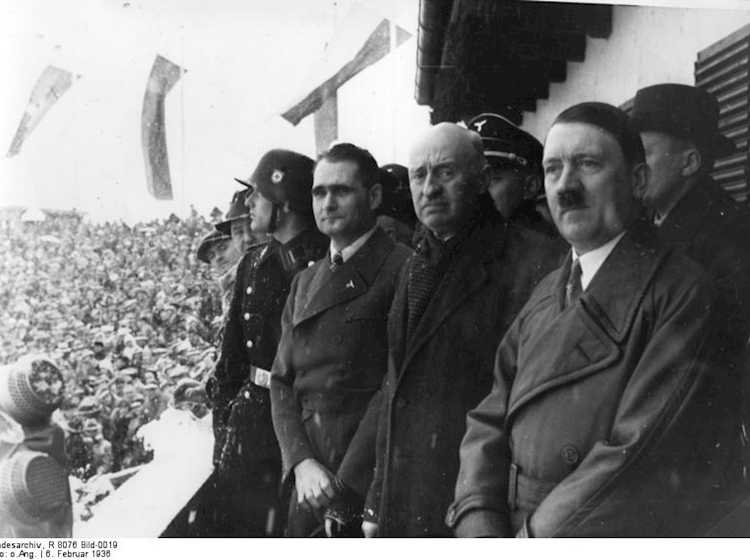 Rudolf Hess (left) and Adolf Hitler (right) with Count Henri de Baillet-Latour, president of the International Olympic Committee, at the opening of the 1936 Winter Olympics
Rudolf Hess in 1930
Hess at Landsberg Prison in 1945, awaiting trial

4. Hess could not have flown over German territory without authorisation

In the same way that RAF aircraft could fly over Britain, aircraft with German markings could fly unhindered almost anywhere over their own territory. There would be certain prohibited areas, such as major cities, or ports, but aircraft would not be challenged if they kept clear of these, especially as at any one time there could be hundreds of aircraft over the country, on operational or training flights. Unless a flight was reported missing it’s unlikely that anyone would hunt for them. Unlike the Royal Observer Corps, the Germans did not have a civilian network of posts to make visual sightings of aircraft. Instead, a huge anti-aircraft organisation known as the Flak (Fligerabwehrkanone), trained rigorously in aircraft recognition, would be on the lookout, but they would not have fired on one of their own aircraft unless specifically ordered to do so. According to Adolf Galland, news of Hess’s flight did not reach Hermann Goering, Commander-in-Chief of the Luftwaffe, until Hess was over the North Sea and beyond their reach.

5. Hess made an intermediate landing at Schiphol Airport, Amsterdam

In a report written when he left the Netherlands in August, James H. Lord, American Consul in Amsterdam, stated that Hess landed at Schiphol airport to have his Bf110 refuelled, following a request by phone from Augsburg. There is no mention of Hess or the plane in control tower log books from Schiphol on 10 May 1941, and there was intensive security at the airport at the time following an escape five days earlier by two Dutchmen in a twin-engined Fokker G-1 long-range fighter intended for delivery to the Luftwaffe. There would have been no need for Hess to land and refuel as the plane was quite capable of making the flight with what was put into the tanks at Augsburg and Hess’s own record of the flight shows that he would have passed about 80km east of the airport. In any case, a diversion from his plan could have endangered the mission.

6. Hess took off from Calais and not Augsburg

Swedish newspaper Svenska Dagbladet published a report on 23 May 1941 stating that Hess had not set off from Augsburg, or from Germany at all, but had rather taken off from Calais. The information is said to have originated from London but both British and German records can verify that no such statement was ever issued from official sources.

7. Hess was escorted for part of his flight by Reinhard Heydrich

Reinard Heydrich, ‘The Hangman’, was head of the Reichssicherheitshauptampt (Main Central Security Office) a service which included the Gestapo. Heydrich’s widow wrote a memoir after the war stating that her husband was ‘residing’ on the Channel coast at the time of Hess’s flight and flying Messerschmitt Bf109s towards England. This caused some to hypothesise that Heydrich would not be allowed to risk his life in the air without special reason and must therefore have protected Hess on his flight, further reinforcing the theory that Hess flew to with Hitler’s approval. However, no German records exist to substantiate the theory that Heydrich escorted Hess for any part of his flight or that he flew over the North Sea that day.

Reinard Heydrich as an SS-Gruppenführer in 1940
A Messerschmitt Bf110, similar to the one flown by Rudolf Hess

8. The RAF and other defences were ordered not to attack Hess’s Messerschmitt

If the RAF had been ordered to allow Hess’s aircraft to pass unhindered, it would have been necessary to advise Fighter Command’s Headquarters as well as very area and sector controller, who in turn would have passed on the orders to their staff and the various RAF squadrons and stations; surely it would have virtually impossible to maintain secrecy at this scale at the time and for so many years afterwards? Moreover, if Hess’s flight had been expected then RAF fighters would have been scrambled to escort it safely to its destination. Public records show that three Spitfires and a Defiant were ordered to attack, not escort, the approaching enemy aircraft.

9. The Luftwaffe’s attack on London was a diversion for Hess’s flight

There was a heavy air raid in London during the night of 10/11 May 1941. 520 bombers were despatched by Luftflotten 2 and 3 to the capital and these dropped over 700 tonnes, including incendiaries. Amongst the historic buildings damaged were Westminster Abbey, the British Museum, the Houses of Parliament, the Law Courts, the Public Record Office and the Mansion House. Fires were started on both sides of the Thames and the number of casualties was high, estimated at more than 1,000 killed and 2,000 injured, stretching the emergency services to the limit. There are claims that 33 German raiders were shot down, but German figures indicate that only 10 failed to return.

Whilst this would have been an impressive diversion for Hess’s flight, and would substantiate the idea that Hitler had knowledge of Hess’s flight, official records indicate that there is no connection. Hess crossed the English coast 300 miles to the north of London at 22.23 hours and baled out over Eaglesham at 23.09 hours. There was no air raid alert at London until 23.02 hours, 39 minutes after Hess crossed the coast.

10. It was not Hess who flew to Scotland, but an imposter

Hugh Thomas, a former Army surgeon, had a theory that an imposter flew to Britain on 10 May 1941 and that the real Hess was murdered. Thomas had visited Hess in Spandau prison in September 1973 but failed to notice evidence on Hess’s body of the bullet wounds he had sustained in Romania in the First World War. He accompanied this theory with additional assertions, including that Hess took off from Augsburg-Haunstetten in a Messerschmitt Bf110 coded NJ+C11, which was shot down, probably by a Messerschmitt Bf109, and replaced by NJ+OQ with an imposter at the controls. However, it seems that the code NJ+C11 never existed, in either military or civil German registrations. There is a lot of evidence to suggest that the pilot who flew to Scotland on 10 May 1941 was truly Rudolf Hess; he was positively identified by Ivone Kirkpatrick, the Foreign Office expert on Germany and while in Britain Hess wrote to his family and friends on numerous occasions – his letters contained personal details which only he could have known – and his handwriting matched that of letters written by Hess pre-war. Apart from the true identity of Hess, there is also the overriding question of why any alleged double would accept life imprisonment without revealing their true identity.

The changing of the guard at Spandau Prison
Part of the fuselage of Hess's Bf110 aircraft on display in the Imperial War Museum
One of the engine's from Hess's Messerschmitt Bf110 on display at the National Museum of Flight in East Lothian, Scotland