The progression of transatlantic liners through history 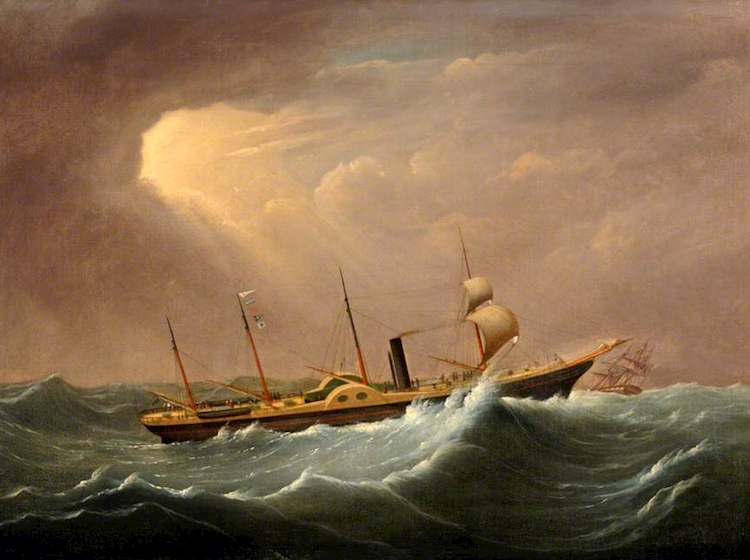 The first true transatlantic liner was the Great Western built by Brunel. She was a paddle steamer and also carried auxiliary sales. The conditions aboard the ship weren’t up to today’s standards there were no refrigerators and so ‘fresh’ produce was carried in the form of livestock. Chickens were carried for eggs and cows for milk! You can only imagine how bad the smell must have been at the end of a 14 day voyage!

A reciprocating engine, or large steam engine, was the most common engine used aboard transatlantic liners until the Turbine was introduced in the twentieth century. It was an enormous piece of machinery, several decks tall, and was used to drive the ship’s propellers. They were also used to create electricity via a dynamo which then illuminated lights aboard the liners. Some of the largest reciprocating engines ever built were those aboard Cunard’s RMS Campania and RMS Luciana from the late 1800’s.

SS Imperator was the first ship built to exceed Titanic in size. She was German, built in 1913 by Hamburg-Amerika line. She was so opulent that her first class ‘Kaiser’ suites had marble finishes which proved too heavy and destabilised the ship so they were later removed.

The German liners Bremen and Europa (1929) were technological marvels. Their streamlined exterior was modern and unique and it outwardly reflected their modern internal technology. They had twenty of the newer style ‘water tube boilers’ which were located in four airtight boiler rooms. Eight steam turbine blowers delivered combustion air into the boiler rooms. This heightened pressure inside the boiler rooms meant that they were only accessible by passing through airlocks! There were two backup boilers in their own airlock for use in ports so the main boilers could be worked on.

Overhead view of Normandie at sea

Normandie was without doubt the most magnificent liner of her day. Her ‘Art Deco’ (or liner style) and ‘Streamline Modern’ interior was the most opulent shipboard interior ever created. The entire design was overseen by famed French architect expert Roger-Henri, who took very seriously the task of decorating France’s new flagship.The majority of the lavish public spaces were devoted to first-class passengers and her grand saloon was designed to reflect the hall of mirrors in Versailles!

The QE2 was the last transatlantic ocean liner built in Britain. She went on to become the most travelled ship in history carrying 2.5 million passengers some 5.6 million miles. When she retired in 2008 it was promised she would have a long life as a floating hotel but sadly this great ship remains in layup.

Cunard’s QM2 is the last of the great transatlantic liners. She is also the biggest at 151,000 tons making her over three times the size of Titanic. She is so large that Cunard Line’s first ship, RMS Britannia could fit into QM2’s dining room.

By Chris Frame and Rachelle Cross