The man who found Dr Livingstone

Famous for having found the great missionary and explorer Dr David Livingstone on the shores of Lake Taganyika and immortalised as the utterer of perhaps the four most quoted words of greetings of all time – ‘Dr Livingstone, I presume?’ – Henry Morton Stanley was himself a man who characterised the great wave of exploring fever that gripped the nineteenth century. Yet his life and achievements are too little known and even his nationality has been mistaken.

Often thought of, and as portrayed as, an American, Stanley was born in Denbigh, Wales. Brought up in a workhouse, he fled to America in his teens and began his varied and exciting life by fighting as a solider – on both sides – during the American Civil War and working as a journalist. It was this last job which led to the event which made him famous: he was commissioned by the New York Herald to find missionary and explorer Dr Livingstone (of whom little had been heard since his departure for Africa in 1866 to search for the source of the Nile).

The 236th day out from Bagamoyo and 51st day from Unyanyembe, 10 promised ‘a happy and glorious morning, the air is fresh and cool’ and Ujiji only a six-hour march away. Towards mid-morning, the caravan approached the summit of a steep mountain and from the top they gazed down on Lake Tanganyika – the end of their journey. Stanley insisted that the caravan move quickly ‘lest news of our coming might reach the people of Ujiji before we come in sight and are ready for them’.

They descended and saw 500 yards below the lakeside settlement where Dr David Livingstone was last known to have resided. All thoughts of the distance marched, hills ascended and descended, forests, jungles, thickets and swamps traversed, hot sun, blistered feet, fevers, dangers and difficulties now vanished. Was the old Scottish doctor down there? Had word of Stanley’s arrival travelled ahead and the old man fled from sight? Or had he died in Africa’s heat, from disease or from a multitude of hardships encountered trudging across the ‘dark continent’ (the term Stanley coined to refer to Africa).

Stanley gave the order: ‘Unfurl the flags and load your guns!’

‘We will, Master, we will,’ the men responded eagerly.

‘One, two, three – FIRE!’ A volley from fifty guns announced that Stanley’s caravan had arrived at Ujiji. The American flag was held high by one of the tallest men and the caravan marched down, to be greeted by hundreds of people coming from their homes wondering what all the noise was about. They surrounded the caravan and shouted words of welcome: ‘Yambo, yambo, bana! Yambo, bana! Yambo, bana!’

The crowd parted to let them through. ‘Good morning, sir’ said a voice in English. Stanley swung around, startled to hear English spoken from among a sea of black faces. A man dressed in a long white shirt and with a turban around his head was smiling. ‘Who the mischief are you?’ asked Stanley.

The smiling man replied: ‘I am Susi, the servant of Dr Livingstone.’

‘What! Is Dr Livingstone here?’

‘Hello,’ said Stanley. ‘Is this another one?’

‘And is the doctor well?’

‘Where has he been so long?’

‘Now, you Susi, run and tell the doctor I am coming,’ ordered Stanley, whereupon Susi darted off like a madman.

The crowd was now so dense that movement was difficult. Susi returned and said the doctor was surprised to hear that a white man was approaching and he had returned to find out his name. Ahead stood a large tembe, a house constructed from mud, wood, palms and other native materials. In front of it was a group of Ujiji’s Arab merchants. Behind them, standing on a verandah, was an elderly white man wearing a blue cap. Was it the man? Stanley confessed: ‘What would I not have given for a bit of friendly wilderness, where, unseen, I might vent my joy in some mad freak, such as idiotically biting my hand, turning a somersault, or slashing at trees, in order to allay those exciting feelings that were well-nigh controllable. My heart beats fast, but I must not let me face betray my emotions, lest it shall detract from the dignity of a white man appearing under such extraordinary circumstances.’

Henry Morton Stanley with his personal servant and companion, Kalulu , 1872

Stanley did what he considered most dignified in the circumstances. ‘I pushed back the crowds, and, passing from the rear, walked down a living avenue of people, until I came in front of the semicircle of Arabs, before which stood “the white man with the grey beard”.’ The supreme moment in Stanley’s life was now only seconds away. With little Kalulu just a few feet behind, the 30-year-old American reporter slowly advanced in the noon sunshine, noticing that the 59-year-old white man was pale ‘wearied and wan, with grey whiskers and moustache, and wearing a bluish cloth cap with a faded gold band on a red ground round it, and has on a red-sleeved waistcoat, and a pair of grey tweed trousers.’

Here, at last, was the object of his search. What should he say to him? ‘My imagination had not taken this question into consideration before. All around me is the immense crowd, hushed and expectant, wondering how this scene will develop itself.’ Stanley decided to exercise restraint and reserve, resisting the temptation to run to him, admitting that he is ‘a coward in the presence of such a mob – [I] would have embraced him, but that I did not know how he would receive me; so I did what moral cowardice and false pride suggested was the best thing – walked deliberately to him, took off my hat, and said: “Dr Livingstone, I presume?”’* 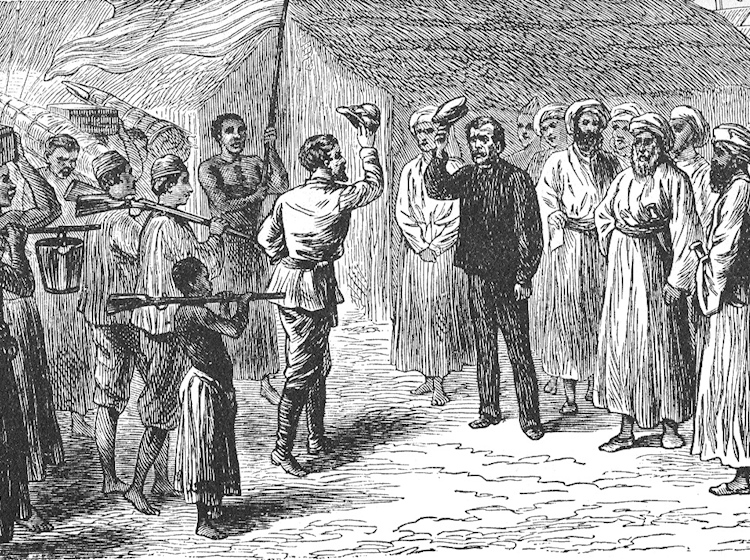 Illustration from Stanley’s 1872 book ‘How I found Livingstone’

‘Yes,’ said he, with a cordial smile, lifting his cap slightly, speaking his first words to a white man for six years.

The two men replaced their hats and shook hands. Stanley then blurted out: ‘I thank God, doctor, I have been permitted to see you.’

‘I feel thankful that I am here to welcome you,’ the doctor answered.

One of the biggest news stories of the nineteenth century had just broken.

* The famous phrase: ‘Dr Livingstone, I presume?’ has entered popular legend, but some historians have cast doubts on whether Stanley actually uttered the words. The diary Stanley kept throughout his search for Livingstone, available on microfilm at the British Library and used extensively by this author, has a missing page – the page on which he records his meeting with Livingstone and his first exchange of words with the doctor. There is no reason to suggest that Stanley did not say the words, as they appeared in the New York Herald dispatch written shortly after the first meeting. Stanley went through the remainder of his life insisting that he had used the phrase, although Livingstone’s own recollection of the same meeting made no mention of words used when the two men met for the first time in the African interior.

Extracted from Mr. Stanley, I Presume?: The Life and Explorations of Henry Morton Stanley  by Alan Gallop