The making of ‘Artisan Stroud’

Sitting on zoom with ‘Dave the bodger’ (chair maker) is not the way I expected to research my book. I imagined I’d be there in the garden on this sunny day that I’d be able to smell the chippings on the floor of his garden studio, the linseed oil on the wood, sit in the finished product, and check out the letter press posters by Dennis Gould on the wall, but it is what it is.

I ask him to take me on a tour with his laptop, describe the smells to me, describe all the various processes and show me the tools. By the end of our conversation I feel like I have been there, in the garden in spring.

Like so many of the contributors to the book, I’ve known Dave for a very long time. When we first met, I’d recently launched Stroud Farmers’ Market and Dave was a Green town councillor. Being a tech professional Dave kindly offered to create a website for the market. It was 1999. I’d just been on a half-day course at Business Link to learn to use email. “I don’t think anyone will really be interested in that,” I said. Dave explained that websites were the way forward, and designed it anyway, patiently training me to update it and to create an online directory of stallholders linked to all the venues they sold at locally.

Since Dave retrained as a green woodworker I don’t think I’ve really asked him that much about this, although I have displayed his work in my shop, sat in his chairs and chatted about the tradition behind them a bit. But have I taken time to notice the finer detail? Have I asked about sourcing the materials, about his new world of wood? I don’t think I have. 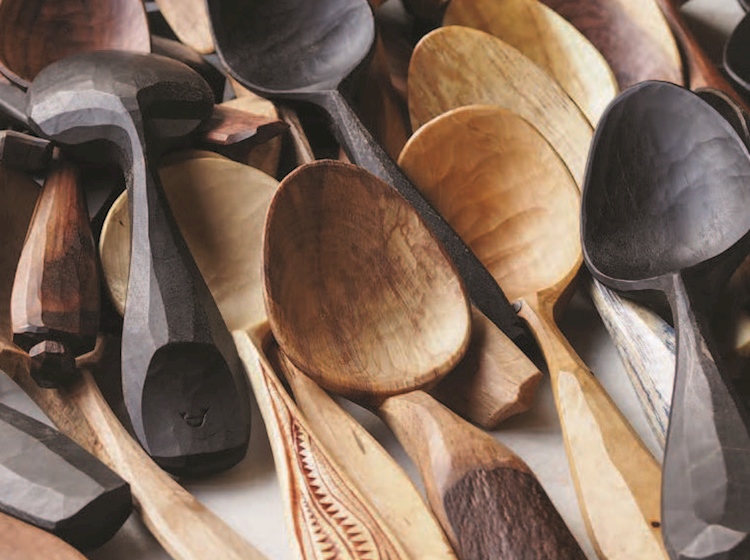 Wooden Spoons made by Dave, image from Artisan Stroud

As with all the conversations with makers, both in person and online, which contributed to the final first edition of Artisan Stroud, I learned so much and got such a greater understanding about the process and end product. The whole process made me realise how very much there is to know about these newly revived industries. The arts make such a significant contribution to the local economy, the local culture and are such a draw for the new found domestic tourism into which we have found ourselves unexpectedly flung here in Stroud following the lockdowns and travel restrictions of the pandemic.

My journey of writing the book has reminded me of the importance of asking the right questions, the importance of documenting what is right under our noses, and it’s brought into sharp focus how very much there is to know, and how after decades of working with makers I know relatively only a little. It has made me aware not only of the importance of asking the right questions, but of how little of this I have done in the past. My emphasis and interest has always been on event management, display, marketing and creating community. I’m more of a gatherer than an analyst by nature.

I’m also acutely aware that I’ve only been in conversation with a small but hopefully representative selection of the artisans in the area, barely scratched the surface of the talent which is hidden in every valley and on every hill, where artisans work tirelessly in garden sheds, old Victorian mills, converted industrial buildings and studios the length and breadth of these valleys to create ‘useful beauty’.

Chair made by Dave, image from Artisan Stroud

I probably know around 200 artisans in the area. Choosing who to include was as much about chance as anything and should not be taken as any sort of judgement of those who aren’t included. The book is intended only to give a flavour of the rich nature of our making landscape.

From a selfish point of view, it has been wonderful to have an excuse to have time to have in depth conversations with people with whom I have worked, or whose work I have bought, studios visited, pieces sold in my shop. I have tried to include a kind of representative sample, if such a thing exists, of what is going on here, quietly, behind the scenes. Artists are notoriously bad at marketing themselves, the very nature of being a maker is all about honing the craft over many years. The selling is often very much an afterthought really. I have loved creating ways for makers to sell, from the initial Made in Stroud makers markets to the farmers markets to The Made in Stroud Shop.

What I wanted to create from day one was an environment where the makers have control. They decide how much to make, what to make and they set the retail price. Not so much ‘Fair trade’ as ‘Community Trade’. They say this is what makes the shop and farmers’ market such a hub for them. We know each other, we chat, and they get to sell their work on their terms. It’s designed to be a fair system where the suppliers feel happy to make, don’t feel under pressure but can hopefully make some sort of a living. I think that is the main distinction which our way of working.

One of the things I picked up through these conversations is the way creative people live in a natural rhythm to accommodate their making, the way they are in touch with the elements, the seasons, the way they organise their day. But something I hadn’t expected to be so amazed by is the sheer amount of obstacles to success each maker has had to overcome, the failures they have had to come back from, the times they have had to reinvent themselves, and the way they keep on getting up and starting again.

I guess that’s kind of a metaphor for the past 18 months for us all really, the need to ask better questions, to never give up, to keep showing up and to believe in ourselves, no matter what.

My hope is that the book will encourage the reader to get out and explore the valleys, the markets, the open studios and the galleries, meet the makers, fill your homes with the handmade and bear in mind the words of the founder of the Arts and Crafts movement William Morris, “have nothing in your house that you do not know to be useful or believe to be beautiful.”

The Stroud Valleys in the Great War

Gloucester: History You Can See

Something to Shout About

A History of Cheltenham in 100 Objects

The Gloucester Book of Days

The Cheltenham Book of Days