The life of an anchoress

The anchorite, or religious recluse, has been a part of Christian religious life since its early days. They lived solitary lives out in the desert – indeed, these solitaries became collectively known as the Desert Fathers. In Ireland the hermits often made their homes in rough stone structures of caves on tiny islands off the coast. It was the toughest life imaginable.

There have likely been anchorites and anchoresses in England since the first conversions, but none were recorded before the 11th century. From there, it was an idea that flourished rapidly for a few centuries, but largely dying out with the Reformation and the country shifting from Catholicism to the more pragmatic Protestantism.

It was quite an enclosed life, lived for years in a single stone room which was usually built on to the side of a church, with a single shuttered slit through to the body of the church so the anchorite could receive communion and take part in services. Those who chose to be anchorites quite literally left life as we live it – the service of the dead was dead before they were walled in. 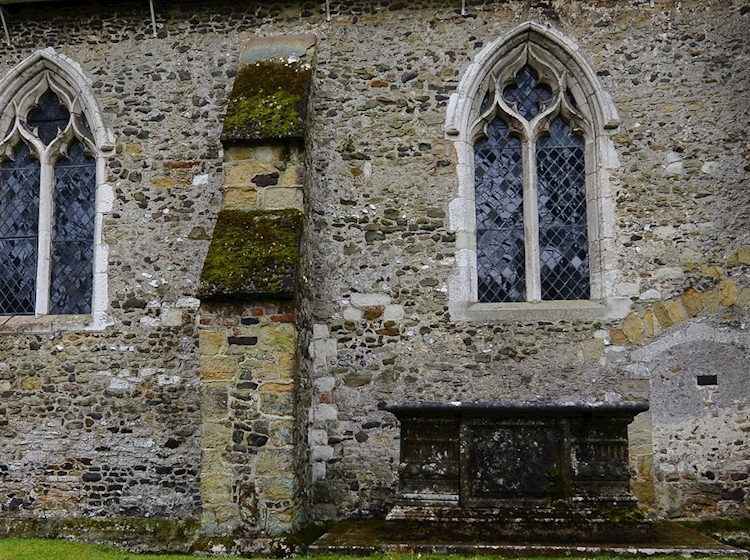 They used chamber pots which were passed through an opening to a servant, who would also bring food. These servants were paid; being a recluse wasn’t something for the poor. But in those days, most (certainly not all) of those who went into convents and monasteries came from well-to-do families who made gifts to the institutions.

In England, Julian of Norwich is probably the best-known of the anchorites. Her book, Revelations of Divine Love, is the earliest extant example of a book written by a woman in the English language, and even today it remains widely read. Her phrase ‘All shall be well, and all shall be well and all manner of thing shall be well’ has become a part of the general lexicon. Yet historians aren’t even sure of her real name. As an old woman she was visited by Margery Kempe, the mystic and autobiographer, who was a famous figure in her own right. 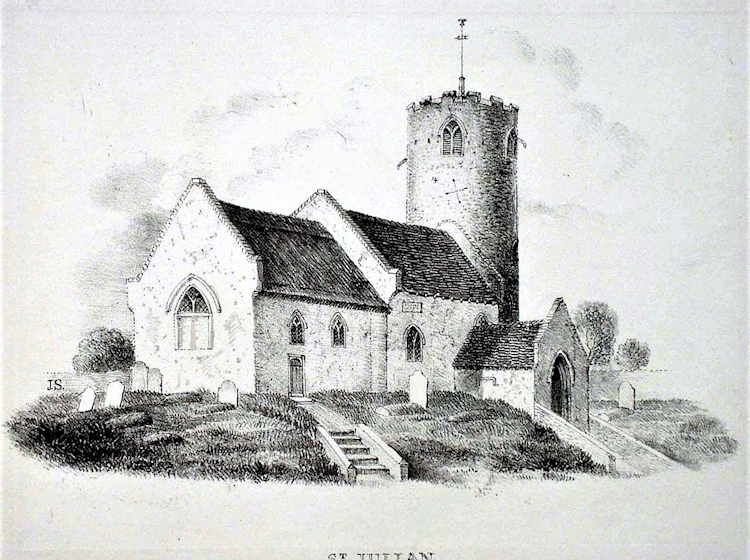 Yet Julian was only one of many anchorites around the country. During the 13th century, it’s estimated there were around 200, although this can never be more than an educated guess. However, women greatly outnumbered men.

What was it that impelled people to become anchorites? Solitude can appeal to some, although it was never complete solitude, with a servant, taking mass, those who visit wanting the anchorite’s advice.

It was service to God, the chance of a life beyond death (remember, the service for the dead was read for them) and their existence was in a kind of living tomb. For most anchorites, any record of their thoughts or desires has been lost to time, if it ever existed, so it’s impossible to understand what was in their minds. It’s vital to remember that most lived in a time when religion was a central part of everyone’s lives, and the ideas of the afterlife, or heaven and hell, were all too real. This world was preached and generally just a prelude to what would come. This life was suffering to be endured rather than enjoyed; certainly true for the poor. The summoners and pardoners we know from Chaucer’s Canterbury Tales did so well not just because people were largely ignorant, but far more because they wanted to believe. 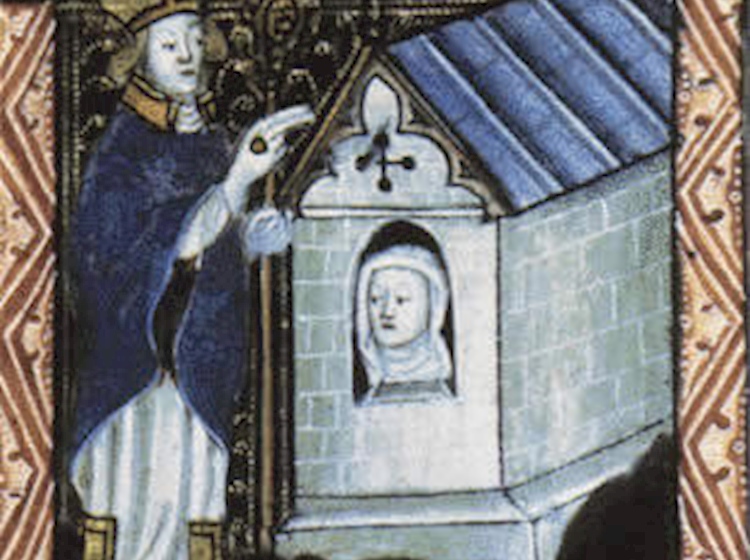 Medieval drawing of a bishop and an anchoress

It was an ascetic life of contemplation and solitude. The anchorites gave themselves completely to God. The whole intention was to serve God, rather than grow closer to Him; that divide was always distinct. Anchorites were regarded as holy, and people would come to consult them for their wisdom and offer gifts. In other words, having an anchorite at the local church could draw a number of pilgrims. As many were in small village churches, this would bring a boost to the economy – although few probably viewed it in those terms – and the celebrity of an anchorite reflected on the reputation of a village or hamlet.

Margaret Kirby, from a family in Ravensworth, North Yorkshire. As a young nun at Hampole, near Doncaster, she came under the spell of Richard Rolle, the spiritual director of the convent. She’d go on to become an anchoress in East Layton, North Yorkshire, just as the Black Death arrived in the country in 1348. Nine years later, when she requested the chance to move to a different church so she could see the mass, that was granted, and a cell was built for her by the church in another North Yorkshire village, Ainderby. It currently has about 300 inhabitants. After the scourge of the Great Pestilence it would have been lucky to have had 40. East Layton is even smaller. Any who wanted to see her had to travel to tiny places that were relatively inaccessible.

Plaque in the wall of St James’ Church, Shere

Rigorous and isolated, it certainly had never the life for everyone. Christine Carpenter became an anchoress in 1329, only to leave her cell again then return three years later. But for most, it was an extension of their religious vocation, albeit an extreme one. While it largely died away in this country, there were still embers in some places in the 20th century: an American woman who took on the name of Nazarena of Jesus became an anchoress at a church in Rome in 1945, remaining there for 45 years until her death in 1990.

The heyday of the anchorite might have long since passed. But the mystique certain remains.