The launch of SS Great Britain

On a showery summer morning in 1843 excited onlookers poured into the city of Bristol eager to witness the ‘floating out’ of Isambard Kingdom Brunel’s revolutionary new ship – SS Great Britain. The date was 19 July 1843, exactly four years to the day since the start of the ship’s construction. Remarkably, exactly 127 years later – on 19 July 1970 – SS Great Britain returned to her home, the Great Western Dockyard.

An air of anticipation

A long day of festivities were planned to celebrate the launch on Wednesday 19 July 1843 and the ships owners had pulled out all the stops for the celebration, most notably by inviting a very special Guest of Honour to oversee proceedings. HRH Prince Albert, Queen Victoria’s husband and one of the most famous celebrities of the day, would be launching the ship.

The 1840s had not been kind to Bristol. Having been a busy trading port since ancient times, the city was in serious commercial decline by 1843 and many Bristolians were hoping that the construction of SS Great Britain would mark a reversal in the city’s fortunes. The Bristol Mirror, which published a special supplement to commemorate the launch, described how the Prince Consort’s patronage should be regarded as much as a celebration of the city of Bristol as a spectacle which marked man’s mechanical genius and that it should reaffirm the city’s confidence itself. The paper describes the pride felt by the local population that Prince Albert would be gracing them with his presence and the efforts they went to in the days ahead of his arrival in order to transform and spruce up the city. According to the reports, in Temple Street many faded and ‘woe-begone’ houses had their frontages cleaned and freshened up with ‘a plentiful supply of water and a limited allowance of paint’ and the streets were decked with all manner of flags, banners, ribbands and flowers. On the day itself, when the Royal cortege passed through the city, all the shops were shut and business was entirely suspended. The ladies of Clifton had even organised elegant parties to entertain the Bristol elite later in the evening. Crowds lined the streets, church bells rang, ships were dressed out in a variety of colours and a cannon was fired. Triumphal arches of laurel, ivy and cut flowers lined the processional route, some adorned with striking arrangements in the shapes of peacocks and birds of paradise. Even the city schoolchildren were involved:

‘Perhaps the most pleasing and gratifying sight to a Bristolian was that of the boys belonging to the City school, and the girls belonging to the Red Maids’ school, stationed on a raised stange, extending the entire length of the Exchange. The air of good order, neatness and cleanliness that marked their attire, the happiness and comfort expressed in their countenance, spoke to the hearts of all...’

Meanwhile, down by the harbour, the proprietors of the yards around Cumberland Basin at the main entrance to Bristol Docks and at the foot of Brandon Hill (which overlooked the harbour) took entrepreneurial advantage of the fine view across to the Great Western dry dock, where SS Great Britain lay. Makeshift viewing platforms and seats had been cobbled together and spectators, keen for a full view of the spectacle, willingly paid admission charges to the premises.

The Royal Train, a special train drawn by the Damon engine (one of the GWR Firely Class steam locomotives) and driven by Brunel on the newly completed Great Western Railway, arrived at a packed Temple Meads station on the Wednesday morning and was greeted by rapturous applause. Two bodies of police were stationed to keep the entrance to the gates clear and further police and soldiers of the North Somersetshire and Gloucestershire Yeomanry lined the streets. A further one hundred soldiers of the 75th foot were drawn up on the platform to the clear the way from the station and a troop of the 4th Light Dragoon Guards formed the Guard of Honour of his Royal Highness. The band of the 1st Life Guards, which had arrived from London the day before, occupied a central position within the station and played numerous airs, including the Dalkeith Palace Waltzes by Labitsky, a selection from the ballet of Alma and a selection from II Puritani and a Polonaise.

The Great Western Railway Company had gone to great lengths in making arrangements to receive his Royal Highness upon his alighting from the Royal Carriage. Two large compartments had been boarded off on the down platform – the first was covered with a rich carpet and contained an antique chair of ‘curious workmanship’ and some velvet cushions. The second compartment was laid down with carpet from the Council-House and was commandeered for the reception of the Town Council and the Clergy. A crimson carpet had been laid lengthways along the platform.

When Prince Albert arrived and alighted from the carriage he was accompanied by the Marquis of Exeter, Groom of the Stole to his Royal Highness; Lord Wharncliffe, President of the Council; Lords Liverpool, Lincoln and Charles Wellesley; Colonel Bouveries, Equerry in Waiting to his Royal Highness and G. E. Anson Esq., his personal secretary. In the other carriage were Charles Russell, Esq., Chairman of the Railway Company and C. A. Saunders, Esq., the Secretary. Prince Albert was not dressed in uniform, but in private dress and the only badges he wore were the ribbon and star of the Order of the Garter.

The Mayor of Bristol and the Town Clerk addressed the Prince and Mr John Savage, Esq., Master of the Society of Merchants, presented him with the freedom of the Society before the Very Rev. the Dean of the Clergy of the City of Bristol presented his address. The men then proceeded to the private room of the Directors for breakfast. Around twenty minutes later Prince Albert took his seat in one of the Royal Carriages in waiting and began his procession through the city, the route of which was lined with magnitudes of cheering spectators.

When the Prince’s carriage approached the harbour shortly after twelve o’clock (having had a quick stop-off in Clifton in order to take in the views) he was greeted by a flotilla of ships and boats of all kinds, each hung with flags of different nations. As he entered the Great Western Dockyard, the crowds cheered and the band of the First Life Guards, stationed aboard the Great Britain, began to play.

Following an escorted tour of the new ship and a banquet held in the company’s engine works, the time came to name the magnificent vessel. At around half past three, as cannon thundered away in all directions, the band struck up ‘Rule Britannia’ and the Great Britain was slowly towed out of her dock by the Avon steamer. 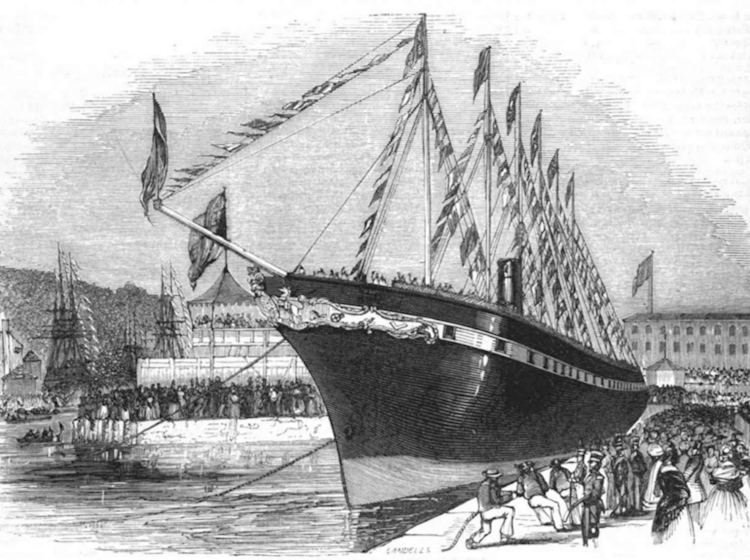 The launch of SS Great Britain in Bristol

Prince Albert invited Mrs Clarissa Miles, the wife of Philip John Miles (one of the Great Western Steamship Company’s directors) and mother of Bristol’s Member of Parliament Phillip William Skinner Miles, to perform the act of christening the ship for him. Unfortunately something went awry and on the first attempt the ceremonial bottle of champagne managed to miss its target of the ship’s hull. As luck would have it, the Prince intervened – seizing a second bottle he hurled it at the vessel and scored a decisive hit. At that point the words ‘The Great Britain’ were pronounced and the ship was named to rapturous applause. With the proceedings having thus terminated, the Prince returned to the Royal Carriages and was driven at once to the railway terminus for his return to London.

SS Great Britain – ‘the greatest experiment since the Creation’

One of the most important historic ships in the world, SS Great Britain was the largest passenger ship in the world when she set out on her maiden voyage in 1845. Designed by Isambard Kingdom Brunel for the Great Western Steamship Company’s transatlantic service between Bristol and New York City, she was the first iron steamer to cross the Atlantic and did so in a time of just 14 days.

Fitting out of the ship in Cumberland Basin, April 1844. This photo by William Talbot is believed to be the first ever taken of a ship

When she was launched in 1843 she was the largest vessel afloat – Brunel fitted her with a 1000 hp steam engine, the most powerful yet used at sea, and rejected using conventional paddle wheels to drive his ship, instead using the newest innovation in maritime technology by giving SS Great Britain a screw propeller. By combining these key innovations, Brunel created a ship that changed history.

However, in 1846, her owners were forced out of business after they spent all their funds re-floating the ship after she was run aground in Dundrum Bay following a navigational error. In 1850 the luxury liner was sold for salvage and repaired. Gibbs, Bright & Co. purchased the SS Great Britain to use for carrying emigrants to Australia, adapting the ship by replacing the original engine with a more efficient one. A second funnel was added, the ship’s rudder and propeller were replaced with new ones and an extra upper deck was built so that she could carry up to 700 passengers. To save money on the run to Australia, the ship relied more on sail power than her steam engine.

SS Great Britain in 1853, after her refit to four masts

By 1876 shipbuilding standards had changed and the Great Britain was no longer insurable for passenger use. Gibbs, Bright & Co. sold her off and her new owners adapted her for carrying bulk cargoes, by removing the engines and rigging her as a huge, 3-masted windjammer. In 1882 she set sail from Penarth, Wales laden with coal and bound for San Francisco. Until 1886 she carried a variety of exports such as coal and wheat between England and the West Coast of America. Following storms off Cape Horn in 1886 Great Britain was badly damaged and her Captain, Henry Stap, was forced to seek shelter in the Falkland Islands. Her owners decided that she was damaged beyond economic repair and so she was sold the Falkland Islands Company and used as a floating storage hulk until 1937, when she was towed to Sparrow Cove, scuttled, abandoned and left to rust away.

Attempts to rescue her in the 1930s and 1960s failed but Ewan Corlett, a naval architect, recognised the importance of the SS Great Britain. After many months of research and planning he attempted a rescue operation to return the ship to the UK. The salvage operation, made possible by several large donations (including from Sir Jack Hayward and Sir Paul Getty) managed to refloat the SS Great Britain on 13 April 1970, despite ferocious gales. She crossed the Atlantic sitting on a huge floating pontoon pulled by tugs and by July 1970 she had been brought 8,000 miles home to her birth place in Bristol. SS Great Britain was finally welcomed ‘home’ – back to the dock in which she was built – on 19 July 1970, exactly 127 years to the day since her launch in 1843.

Visitors can stroll on the decks, take in the interiors and experience the sights, sounds and smells of life on board. Also included is entry to the Great Western Dockyard, so you can see where the story began, and The Dockyard Museum, which tells the ship’s adventure-filled life. You can even admire the ship from underneath with entry to the Dry Dock. New for 2018, the Being Brunel museum explores the life and legacy of Isambard Kingdom Brunel and tells his story through never-seen-before personal possessions, as well as interactive exhibits and audio-visual experiences.

For more information about Brunel’s SS Great Britain and planning a visit please go to:
https://www.ssgreatbritain.org/