The history of street photography

The saying goes, ‘A picture is worth a thousand words’ and street photography certainly lives up to this reputation. Since its inception in Victorian times, humankind has had a fascination with capturing not only the real, raw and gritty but also the mundane.

Forms of photography have been around for millennia with the camera obscura (latin for ‘dark room’) where the image is projected through a pin hole into a dark room or screen.  It wasn’t until the 19th century that a process was invented to ‘fix’ the image onto metal and glass plates (and later paper) to keep for posterity.

What we take photographs of in the 21st century is virtually the same as what the Victorians took photographs of - streets, landscapes, people, sports, stills etc.  The first known photograph ever taken was of a Parisian street scene in 1826 by Joseph Nicéphore Niépce, the first known portrait was taken in 1839 by John William Draper of his sister Dorothy and the first selfie was taken in 1839 by a young man called Robert Cornelius. The innovation of shutter speeds a few decades later enabled freeze motion, which meant portraits could be taken in a matter of seconds rather than a person sitting absolutely still for tens of minutes (hence portraits of Victorians tended to be somewhat stern looking) and also meant action shots could be taken without blur.

The first photograph ever taken in 1826 by Joseph Nicéphore Niépce in the Burgundy region of France. 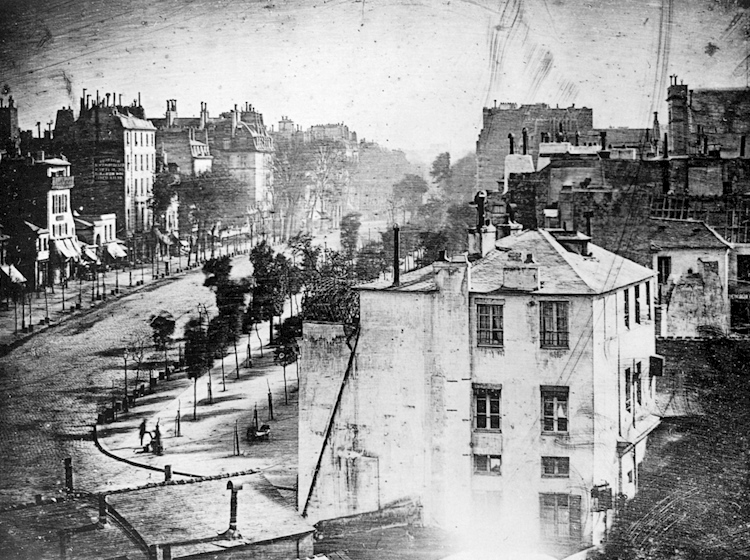 The first street photograph. The image of a man has been captured as he stood still long enough whilst having his boots shined in 1838 by Louis Daguerre in Paris.
The first 'selfie' by a man called Robert Cornelius in Philadelphia 1839
The first photographic portrait of a woman by John Draper of his sister Dorothy Catherine Draper in 1839/40 in the USA
A Victorian photographic studio in 1893. Note the metal headrest to hold a person still for a given length of time

So what is street photography exactly?

From exclusivity to ubiquity, street photography’s definition has evolved alongside the opening up of the medium to all people of all backgrounds in conjunction with its technological advances from its origin of metal and glass plates to film to digital.

The definition of street photography (or photographer) is also different from 1918 to today. In Edwardian times it used to be a photographer who would take portraits on the street for a fee. During the two World Wars, the format could also have been argued to be under the umbrella term of ‘war photography’ and possibly photojournalism.  Aside from journalists, ordinary people and hobbyist’s priorities did not tend towards luxuries such as film for their cameras (if they could afford one) during these tough years.

Post war saw the growing affordability of cameras and the consequent boom in candid and social documentary photography. Photographers such as Henri-Cartier Bresson and Diane Arbus who documented the everyday weird and wonderful in the 1950’s were probably the pioneers of what we are familiar with today.

The photograph becomes a type of ‘Memento Mori’ for bygone times and can elicit a powerful psychological response. Every minute and moment of life can be photographed and kept for all time.  If we look at photos of a street scene in 1980s New York with the Twin Towers in the background, we immediately remember the tragedy of 2001, where we were and the other haunting images of that day. Another example would be those from Shirley Baker, images of kids playing in the streets of Salford in the 1960’s. If the viewer recognises the clothes, hairstyles etc, they would reminisce over their own childhood memories. It uniquely indulges the nostalgia within us.

It can be said that the pace of change in social and cultural demographics has picked up during the 20th and 21st centuries and street photography provides a wonderful (and at times, discreet) way of documenting our way of life for future generations. Anyone with a phone in their hand has the ability to take a street scene photograph. It’s the age of the ‘happy snapper’, instagramming every moment of life.