The future of the HMHS Britannic

Simon Mills, the man who purchased the rights to the wreck of the HMHS Britannic in 1996, talks about the future of the ship’s restoration project…

I don’t know why but whenever someone asks me what it was that made me buy the British Government's title to the wreck of the Britannic I can never give them a definitive answer; I don’t know why I did it – I just did. It is a bit like the young lady who once told me that although I was the owner of the Britannic I was not at all what she had expected. When I asked her what or who it was that she had expected, her reply was simply: ‘I don't know – just not you!’

All I can really say for sure is that my interest in the Britannic developed from an accidental involvement in a Titanic documentary project in the late eighties, and by the time I had finished the project, I found myself in the position of being the supposed ‘expert’ on her two sister-ships. As the ‘expert’, since 1995 I have helped to coordinate seven expeditions to the wreck resulting in seven documentaries, and I have now also published and edited three books and written countless articles on the subject, so whenever anyone tells me that Britannic is Titanic’s ‘forgotten’ sister they usually get a suitably choice response. Personally I prefer the soubriquet of ‘Titanic’s big sister’, because as any schoolboy should know, Britannic was the third and largest of the White Star Line’s Olympic class trio.

As if the story of the Titanic isn’t dramatic enough some people still want to embellish it and as a result the supporting characters (people and ships) have also found themselves drawn into the controversy. Because of this for the first ten years, I probably spent more time disproving the many myths and legends that have subsequently grown up around the Britannic, with conspiracy theories of secret name changes, illicit wartime cargoes, the deliberate misplacement of the wreck, an illegal U-boat torpedo and even a secret treasure!

The second decade was a lot more exciting and after a succession of expeditions to the wreck using submersibles, manned divers and remote operated vehicles (a.k.a. ROVs) we now understand more about the Britannic and life on-board the ship than ever. Direct comparisons between the Titanic and Britannic wrecks are probably inevitable and, thanks to our work, it is now finally possible, but with Britannic being that much more accessible, the potential for controlled archaeological and coordinated scientific study is greater than ever.

Although the wreck is still – almost – in one magnificent piece, inevitably the hull will one day collapse, but the Britannic is now the subject of considerable interest in Belfast, London and Athens, and if a conservation project that is currently being discussed in the diplomatic corridors of power gets the go ahead, then the work that we have carried out to date will only have scratched the surface.

After one hundred years on the seabed, the Britannic’s story could be about to develop in a manner that even five years ago would have been thought almost impossible. 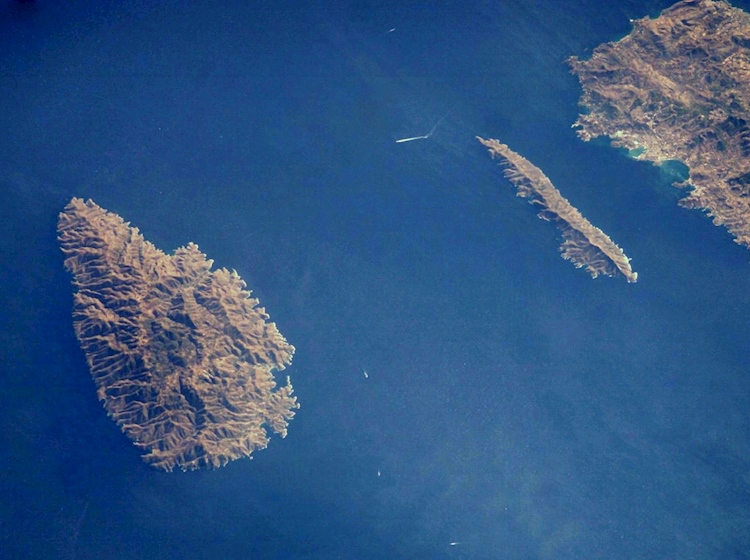 The channel between Kea (left) and Makronisos in the Aegean Sea where Britannic sank. The wreck lies closer to Kea.
A postcard depicting Britannic as the intended RMS Britannic transatlantic passenger liner