The forgotten men of the London Underground

At this very moment in time there are huge mechanical earthworms journeying through subterranean London. Working day and night, these loud and heavy beasts, known as Tunnel Boring Machines, are creating new tunnels below the city, as part of the Crossrail transport route that is set to change the way people move across this historical city. Things were a lot different 150 years ago. Work began in 1860 on the Metropolitan Railway, the original line on what would later become the famous London Underground network. It was to be a short route of just three and a half miles, connecting the busy railway stations at Paddington, Euston, Kings Cross and St Pancras to the City of London.

But what it lacked in distance it made up for in vision. Railway tunnels were not new, but the concept of an entire railway below the streets was revolutionary. The press decided it would never work, but a sceptical public soon warmed to the idea of descending below ground to ride a train, and within weeks of opening in January 1863 the Metropolitan Railway was carrying thousands of people every day.

Much has been written about the great men behind the idea of the railway; the foresight of John Pearson, who not only saw the Metropolitan as a solution to London’s congested streets but also as a way of clearing slums and improving the lives of the poor, and John Fowler, the great engineer with the requisite skill needed to make such a radical idea work.

Less well remembered though are the men who were tasked with actually building the railway. There were no Tunnel Boring Machines in the 1860s, or even anything other than basic hand tools. This was to be an arduous task that could only be achieved by months of back-breaking work. Fortunately for the owners of the Metropolitan Railway, there was a particular band of hard-working men they could call on to get the job done.

They were known collectively as ‘navvies’; derived from the word ‘navigator’, which itself was used as a name for those who built navigable canals. Miles of canal had been constructed in the first half of the nineteenth century, opening trade routes from London out across Great Britain, with the work having been carried out by thousands of navigators.

There were said to be more than 200,000 navvies working across Britain in the nineteenth century, the vast majority being former tin miners from Cornwall, or farmers from Scotland and Ireland. The men were willing to go wherever there was enough work, and with the job on the new canal network largely complete, they found steady work with railway companies across the country.

To have the navvies work on the construction of a project such as the Metropolitan Railway was beneficial for all parties. The company was guaranteed a cheap but dedicated workforce who was willing to work long hours in poor, often dangerous conditions. The navvies meanwhile were guaranteed lots of work for a rate of pay that although was cheap to the company, was actually generous in comparison to other jobs.

With little regard for their own personal safety, thousands of navvies worked tirelessly to build the new railway, digging their way through the streets of London from Paddington to Farringdon. The work involved using a construction method known as cut-and-cover, where a trench would be dug below an existing road. Track would then be laid in the trenches, and shored up on either side by a lining of brick. The trenches would then be roofed over and the road re-built on top.

It was a long and frequently dangerous process. There were several serious injuries and deaths during construction, including a horrific incident early on when two men were killed by an exploding boiler on a steam engine being used to remove earth. The workers also had to contend with frequent floods from the buried River Fleet, which ran close to where the railway route made it’s way through the Clerkenwell area towards Farringdon.

The only downside for the Metropolitan Railway in employing navvies was the bad reputation that tended to precede their every move. This was a group of men who worked hard and played even harder, unwinding in the evenings with legendary drinking sessions that almost always ended in a mass brawl. The railway company was hit with several complaints from the police, landlords and members of the public, all of whom demanded that the men be properly managed.

The Metropolitan Railway owners weren’t too fussed about the trouble their men were causing though, especially considering much of the uproar was in London’s most notorious slum areas. A few years later however, when the navvies were used to construct the Metropolitan District Railway, the men were this time causing havoc in some of west London’s most affluent areas.

Construction methods used across London’s growing subterranean railway improved over the following decades. Tunnelling shields, based on the same principle as the pioneering device designed by Marc Brunel for his famed Thames Tunnel, were used to build the tunnels of what today are the Northern, Waterloo & City, Central, Bakerloo and Piccadilly lines.

It was still a back-breaking job for the men working at the face of a tunnelling shield, with the vast majority of construction work still done by hand. Unlike the cut-and-cover method, which only required shallow trenches, the ‘deep level’ lines were built far below ground, with actual tunnels being built. Conditions were therefore cramped, dark, cold and wet.

The later Victoria and Jubilee lines benefitted from the use of more automated tunnel digging machinery during their construction, but even then there was still much handwork to be done. Modern Tunnel Boring Machines became the norm on projects like the Jubilee Line Extension in the mid- to late 1990s, and through various extensions of the Docklands Light Railway, yet they still required dirty and sometimes dangerous work.

2013 was full of fantastic events to mark 150 years of the London Underground, with special steam train runs that have recreated the original Metropolitan Railway route, and many great articles written about Pearson and Fowler, and men like James Henry Greathead, Frank Pick, Charles Yerkes, Harry Beck, Charles Holden and other names who played a key role in the history of the world’s most iconic transport system.

Let’s not forget those hardworking and brave men who made it all happen though. It’s thanks to their dedication and skill that we are still riding through those very same tunnels and trenches over a century and a half later. 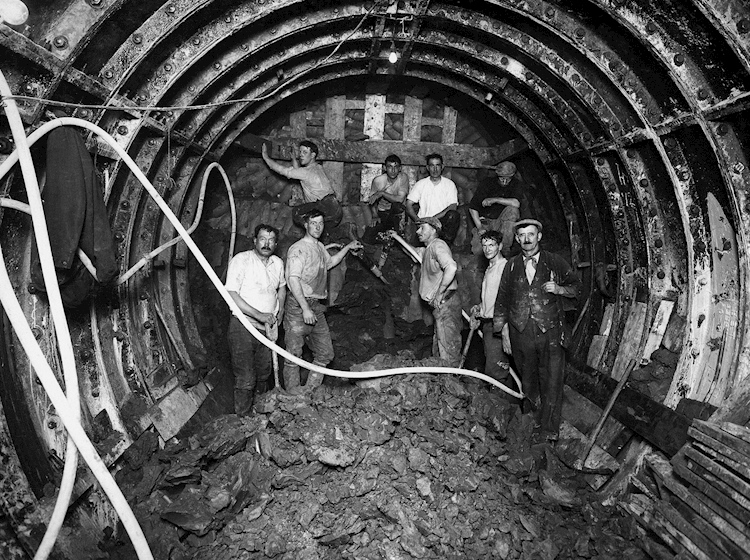