The first flight of the Gloster Meteor

5 March 2018 marks the 75th anniversary of the first flight of the first ever British and Allied jet fighter, the Gloster Meteor, in 1943. It was the first British combat aircraft to be powered by Frank Whittle’s revolutionary invention, the jet engine.

At the controls at RAF Cranwell was Gloster’s chief test pilot Neil ‘Michael’ Daunt. With the serial number DG206/G, it was the fifth of eight F9/40 Meteor prototypes.

DG206/G hasn’t survived, but the first one built, DG202/G – first flown in July 1943, again piloted by Daunt – now holds a place of honour in the RAF Museum at Cosford.

Armed with four 20mm cannon, Meteors were delivered to the RAF for squadron service the following year. Early versions saw limited service before the end of the Second World War in 1945.

RAF Meteors never met in combat with their German counterpart, the Messerschmitt Me 262 jet fighter, but were used to shoot down the V1 flying bombs, popularly known as doodlebugs, which the Germans were launching against London.

After the war Meteors soon replaced piston-engined types in frontline RAF fighter squadrons and went on to serve with eleven overseas air forces as their first jet type. Two-seater trainer and night fighter versions were developed, as well as Meteors for a range of specialised tasks.

The Meteor had its shortcomings but was nonetheless a remarkably successful aircraft. It broke the world absolute speed record in 1945 and 1946 and remained in production until 1955. A total of 3,897 were built*, including some 300 in Belgium and the Netherlands.

* Quoted total Meteor production figures vary from source to source, but the figure of 3,897 is authoritative. It comes from the errata to ‘Gloster Meteor’ by Phil Butler and Tony Buttler (Aerofax 2006). Don’t rely on Wikipedia!

The Jet Age Museum at Gloucestershire Airport, Staverton is home to the UK’s largest collection of Gloster Meteors.  From an early F3 cockpit through, three T7 trainer variants, an F8 and two night fighters, an NF11 and NF14, the collection records the rapid development of the type.

The museum is a all-volunteer registered charity and opened its purpose-built 10,000 sq ft building in 2014. Open from 10am - 4pm at weekends and Bank Holidays throughout the year and on Wednesdays during school holidays, the museum has welcomed over 100,000 visitors and has emerged as Gloucester’s number one visitor attraction according to travel rating website TripAdvisor.

Admission and parking are free with the museum relying on donations in addition to sales generated by the small cafe and gift shop on site.

The museum also runs an educational and group visit programme outside its core opening hours and has engaged with the Airport and other local aerospace businesses in hosting various special events and exhibitions.

Fundraising is underway for ‘Phase 2’, which will double the display space, add a gallery and restoration facility. It is hoped that work will commence on this in early 2019.

To find out more about the Jet Age Museum and their work, or to plan your visit, please go to www.jetagemuseum.org/ 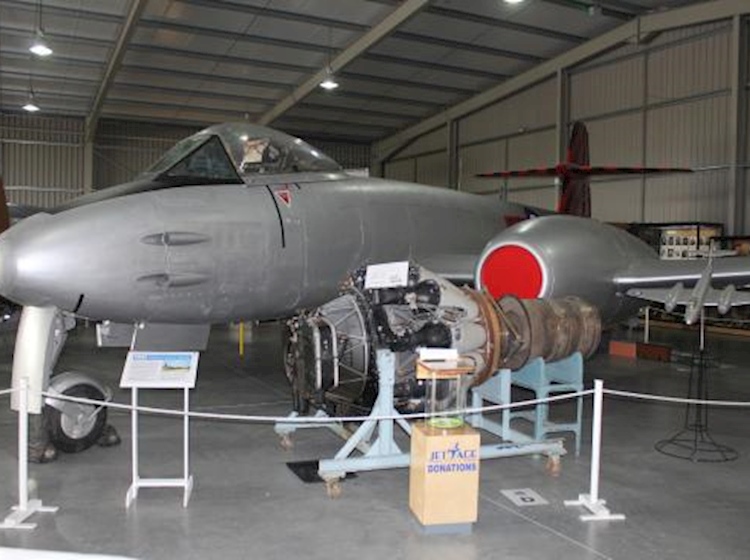 With thanks to Tim Kershaw and Darren Lewington