The Festival of Britain 1951

In 1951 towns and cities across Britain still bore the devastating scars of the Second World War which had ended only six years earlier.  After more than a decade of rationing, austerity and making-do, gloomy post-war Britain needed a lift. The government’s antidote was ‘The Festival of Britain’, a national exhibition designed with the aim of promoting a feeling of recovery and demonstrating Britain’s contribution to civilisation past, present and future in the arts, science and technology and industrial design.

Opening in May 1951 and lasting until that September, the Festival was timed to coincide with the centenary of the Great Exhibition in 1851, but rather than being a world fair it focused entirely on Britain and its achievements and being a beacon for change. Funded mostly by the government with a budget of £12 million, Labour cabinet minister Herbert Morrison (MP for South Hackney and former leader of London County Council) was the chief organiser.

The Festival of Britain emblem, designed by Abram Games, on the cover of the South Bank Exhibition Guide

Although it was a national event London, was most certainly at its heart - particularly as the centrepiece of the Festival was constructed on a 27 acre area on the South Bank of the Thames in Lambeth. Old Victorian buildings and railway sidings which had been left untouched since being bombed in the war were transformed into the South Bank site, a new public space which was intended to showcase the principles of design that would feature in the post-war rebuilding of London and the creation of new towns. In keeping with the principles of the Festival, 38-year-old architect Hugh Casson was appointed Director of Architecture – he then appointed further young architects to design the South Bank buildings and riverside walkway most of which were designed in the International Modernist style, incorporating multiple levels of buildings, elevated walkways and open interiors.

The Festival took pride in Britain’s past, but also looked to the future. New structures were erected to house exhibitions exploring Britain’s landscape, British industry and science and the British character. These included the Royal Festival Hall - a new 2,900 seater concert hall; the Dome of Discovery – the largest dome in the world at the time at 365ft in diameter which housed exhibitions on the theme of discovery such as Polar regions, the New World, the sea, the sky and outer space - and the Skylon – an iconic, futuristic vertical cigar-shaped tower held in place by tension cables which gave the impression it was floating in mid-air. 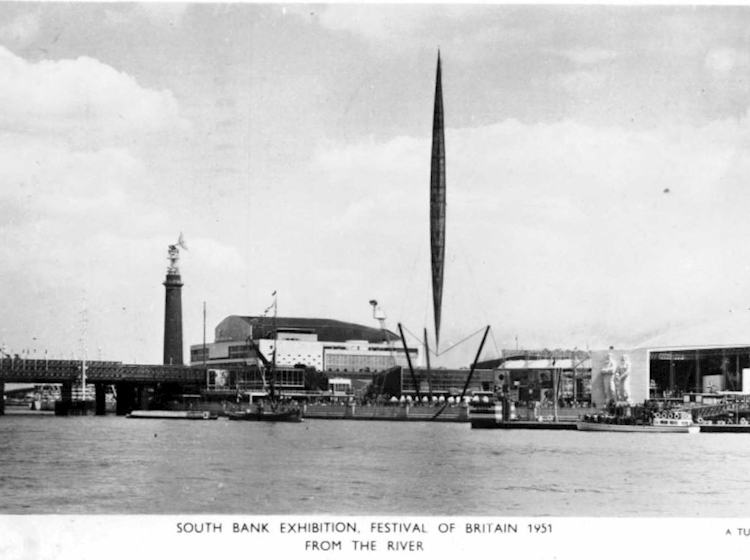 One of the most popular attractions at the South Bank site was the Telekinema, a 400-seat state-of-the-art cinema operated by the British Film Institute (BFI) which could screen films, 3D films and large-screen television and it was here that many visitors saw their first ever television pictures. After the Festival closed the Telekinema became the home to the National Film Theatre, but this building was demolished in 1957 when the National Film Theatre moved to the site it still occupies at the South Bank Centre. The only existing building to be incorporated into the new site was a tall brick tower, built in the nineteenth century to make lead shot by dropping molten lead from a height. This was used to house a large radio telescope and transmitter.

Other Festival displays went on show elsewhere in London. A new wing of the Science Museum in South Kensington held the Exhibition of Science, a large funfair consisting of Pleasure Gardens, riders and open-air amusements was erected in Battersea Park and in Poplar, east London, a new housing estate was built as a ‘live architecture exhibition’. Designed to incorporate all the latest thinking about architecture, town planning and communities, the Lansbury Estate consisted of a shopping precinct, a library, a Building Research Pavilion, a Town Planning Pavilion and a building site showing houses in various stages of completion, including high-quality housing in multi-storey blocks of flats. Despite organisers’ best efforts the Live Architecture Exhibition was a disappointment in comparison to the South Bank attractions, only achieving around 10% of the number of visitors and it was received badly by leading industry figures.

Although the main site was in London, the Festival of Britain was still a nationwide affair. Heavy engineering was the subject of the Industrial Power exhibition in Glasgow, there was a ‘Farm and Factory’ exhibition in Belfast and the arts were displayed in a series of countrywide performances. Throughout the summer months Festival ship Campania toured the coast of Britain with a smaller exhibition of the South Bank story.

As with most Government sponsored projects the Festival met with controversy (remember the Millennium Dome?!). Before it even opened, some condemned it as a waste of public money, particularly when so many houses had been destroyed during the war. Then, once it was open, criticism turned to both cost – the entrance to the Dome of Discovery was considered expensive at five shillings – and the artistic taste – some thought parts were too futuristic, too gaudy, too innovative.

Nevertheless, the Festival of Britain was popular, touching all parts of the nation for those five months in 1951 - in shops, on the radio, in concert halls, on stamps. It is estimated that of the national population of 49 million, around half participated in some way. The South Bank exhibition was the most popular event, attracting almost 8.5 million visitors of which half were from outside London. The Pleasure Gardens had over 8 million visitors (three-quarters of these were Londoners) but the Campania, which docked in 10 cities, was visited by almost 900,000 people. As a national morale-booster it was most certainly a success.

The Festival was always intended as temporary installation, and it closed in September 1951 after a five month run. In the month following the Festival’s closure a new Conservative government was elected to power and it is generally believed that incoming Prime Minister Churchill considered the Festival a piece of socialist propaganda. His first act as Prime Minister in October 1951 was an instruction to clear the South Bank site; the only feature to be retained was the Royal Festival Hall. Despite this order, an important legacy of the Festival remained and this was the change it made to the character of the South Bank. The Festival of Britain transformed the area from a site of industry to a place of culture and the arts and in the 30 years following the Festival the site was developed into the South Bank Centre, an arts complex which now houses the Royal Festival Hall, the National Film Theatre, Queen Elizabeth Hall and the National Theatre.